Five books I read after seeing the movie

I've stated it here before, but when you've got a movie based on a book, I believe it's better to wait until after you see the movie before you read the book. You're less likely to be disappointed by the movie that way. Whenever I do so, often it's because the movie intrigued me enough that I wanted to know more of the story and/or the characters. There's rarely any kind of time frame for this; it could be days after I've seen the movie or months or years. Used book stores are best for this sort of thing. I love them. The first time I walked into a Half Price Books when I lived in Columbus I knew I'd be shopping there often, and I did. And New York, of course, has used book stores all over the place.

This is by no means a complete list, but it'll give you an idea of what kinds of stories I dig. 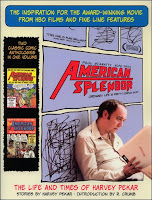 - American Splendor. I had read one or two American Splendor comics prior to seeing the movie, but at the time I didn't think a great deal of them. I was still relatively new to independent comics, and didn't know (and probably didn't care, to be honest) about the history behind Harvey Pekar's long-running series. Then I saw the movie and loved the hell out of it. So afterwards, I went out and bought an AS collection that was released around the same time, along with his Our Movie Year, which chronicled the making of the movie. Pekar, of course, worked with a wide variety of artists, and the styles ranged from great to decent.

I still think Pekar is an acquired taste. He didn't always write with a theme in mind, or a point to make; he'd just tell a story that he thought was interesting, no matter how esoteric, and lay it out there. He wouldn't try to dress it up with storytelling gimmicks, nor did he have a particularly lively writing style, yet the movie captured the essence of AS and turned it into a fascinating film that never let you forget its source material. So this is one case where I thought the movie exceeded the book.

- High Fidelity. I'm a total Nick Hornby nerd now, but believe it or not I had to be dragged to this movie. The girl I was with wanted to see this and I wanted to see something else and she won, of course. She loved it; I thought it was just alright. Then, years later, I picked up the book out of curiosity and my entire attitude changed. I was gobsmacked at Hornby's writing style: witty, hip, and self-aware, yet with a great sensitivity and tenderness at its heart. It made me look at the movie differently, and before long I came to like the movie as well.

Now I have all of Hornby's novels (picked up Juliet, Naked in paperback a few months ago). I love how they all occupy a shared universe; a character from one book will often make a cameo appearance in another. I think my favorite Hornby novel might be How To Be Good, though if it were to be made into a movie it would require an exceptional screenplay.

- Johnny Got His Gun. Ugh. I found the 1971 film boring - the best bits are all in the Metallica video for "One." (Never saw the 2008 version; I'd like to one of these days.) I picked up the book years later after learning more about author Dalton Trumbo and the Hollywood blacklist.

Am I glad I did. I have never read a better book about war, before or since - and frankly, it's better than most war movies! It's absolutely heart-wrenching to read at times, but well worth it, because it exposes the futility of war brilliantly. I realize Trumbo himself directed the 1971 film, but I dunno, for me it didn't have half the impact of the book itself.

- Mystic River. I'd never heard of the name Dennis Lehane prior to the Clint Eastwood-directed movie. Here's a case where I liked the movie a lot and it made me want to get the book as well. The book expanded on certain plot points and characters, naturally, but otherwise much of the story remained intact. I'm normally not a big one for crime novels, but Lehane appealed to me and still does. I've since read Shutter Island (before the movie this time) and Darkness Take My Hand, but not Gone Baby Gone, even though that's also a Kenzie & Gennaro story. I've still got some catching up to do. (And how lucky is Lehane to have three of his books turned into great movies?)

e. The trailer looked interesting, so I figured I'd try the movie, and I liked this one too, and based on what I had read about Pulitzer-winning author Jhumpa Lahiri, I thought I'd look at her books as well. I actually bought Interpreter of Maladies first. I was in a Barnes & Noble in Brooklyn and I was struggling to remember Lahiri's name when I asked a clerk there who the author of The Namesake was (this was days after I saw the movie).

He told me, of course, and then pointed to a table displaying books by Brooklyn-based authors, of which Lahiri is one. Namesake wasn't there, but Interpreter was, and when I saw that this was the book that won her the Pulitzer, I figured I'd read it before Namesake. Like the movie, I found both books insightful looks into Indian and Indian-American culture. I also read Unaccustomed Earth; I thought it was okay, but not as good as the first two.

Email ThisBlogThis!Share to TwitterShare to FacebookShare to Pinterest
Labels: books, lists and compilations