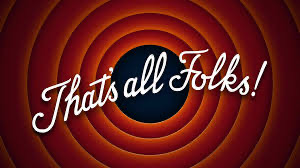 Ten and a half years ago, I started this blog. That’s a fair-sized chunk of my life. What began as an exercise in journalistic writing grew into something much more. I’ve made friends as a result of WSW, gone a few different places and done a few things I probably wouldn’t have otherwise.
This blog was always meant to be a way for me to put my writing skills to good use—but now my writing goals have changed.
If you’ve followed WSW long enough, you know I’ve struggled with becoming a fiction writer. I’ve had a novel manuscript for seven of those ten-plus years and you’re probably as sick of hearing me talk about it as I am with rewriting it, but I’m closer to done now than I ever have been. I want to pitch it to a publisher. I want to build a career off of it. I wanna try at the least.
Which is why I’m starting a new blog. By Rich Watson will be where I take everything I’ve learned about blogging to the next level. It won’t look like WSW, but I like to think the feel will remain. I hope you’ll join me.
The movie industry has changed dramatically as a result of The Virus. Streaming services have multiplied and frankly, there are way too many of them out there to keep up with. I’m missing out on new movies I could’ve and would’ve seen had the theaters not closed.
The theaters here in New York are back now, which is good, but even so, a part of me feels like I may have lost my mojo for film blogging. Too much has changed too quickly, but even if that weren’t true, I don’t want to maintain two blogs, nor do I want to stick to the oldies format for this one.
So I’m afraid this is a wrap.
To everyone I thanked at my tenth anniversary party, consider yourself thanked again, in addition to a few more shout-outs: Don & Katha Cato at the Queens World Film Festival, the LAMB movie blogger collective, my guest bloggers Andrea McEnaney and Maria Ramos, and most of all—you.
Because you helped make WSW possible.
And that means a lot.
Thanks for reading.
Rich Watson
Queens, New York
2021
Posted by Rich at 7:00 AM 9 comments:

Star Trek: City on the Edge of Forever 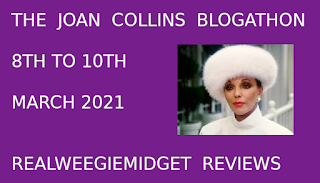 The Joan Collins Blogathon is an event dedicated to the life and career of the film and television actress, hosted by RealWeegieMidget Reviews. For a list of participating bloggers, visit the link at the host site.
Star Trek: City on the Edge of Forever
Netflix viewing
1930
Took the last bit of money I had to make it to New York and everything went to hell not long after. Stock market. The hell did I know about the stock market and whether or not it was gonna crash? If what the papers said was true, white folks’ greed got the best of them—and this time they done took the rest of the country down with them.
I lost my room on 123rd and spent the past few weeks living rough. For damn sure Harlem didn’t have no work to be found, so I headed downtown. Man, so many whites on the streets, with no place to go, lost, tired... It wasn’t just niggas feeling the hurt from this... “depression.” It was everybody. The whole damn world done turned wrong-way up and changed how we live.
And wasn’t no end in sight as far as I could see.
By the time I reached 21st Street Old Man Winter came and I had to get my black ass inside some kinda shelter before I froze. Don’t know what I would’ve done if that English lady at the mission hadn’t taken me in.
Read more »
Posted by Rich at 7:00 AM 8 comments:

I’ll have a major announcement on March 9 that you’re gonna want to be here for. I probably should spill the beans now, but I’ll wait. In the meantime, not a lot of new stuff on Netflix that I watched... 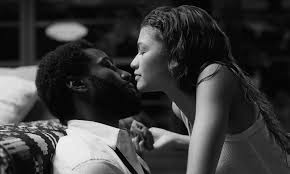 —Malcolm & Marie. Up-and-coming filmmaker and his girlfriend come home from the premiere of his film only to hash out lingering issues pertaining to his worth as a director and her value to him as a muse. You probably know by now that writer-director Sam Levinson made this during the quarantine period last year, which is a story unto itself, and lately it became a lightning rod for other issues of the moment, but honestly, I didn’t think of or care about any of that when I saw it. It’s been called a Millennial Virginia Woolf: bickering couple, one long night, black and white. Some of it was excruciating to sit through, I admit: the language, the wandering narrative, but the acting from John David Washington and Zendaya was fine, especially given the difficult circumstances they must have gone through to make this film. Good not great.
BONUS! I had the opportunity to watch One Night in Miami on Amazon Prime last month. The feature film directing debut of Oscar-winning actress Regina King, it’s a fictionalized account of the night in 1964 when four legendary black men—Cassius Clay (before he became Muhammad Ali), Malcolm X, Sam Cooke and Jim Brown—hung out together, after Clay defeated Sonny Liston to become the heavyweight boxing champion. It’s based on a play.
I remember King from her days as a child actress on television and it’s wonderful to see how much she’s progressed as a filmmaker. This film is basically just four guys in a room but, as you can imagine, they have some important things to say to each other, things that speak as loudly to us today as they did then. The only name among the stars I’m familiar with is Leslie Odom Jr. (the guy from Hamilton) as Cooke, but all the stars—Eli Goree (Clay), Kingsley Ben-Adir (Malcolm) and Aldis Hodge (Brown) are exquisite. A solid film debut from director King.
———————
The reopening here in NYC: on the local level, Cinemart in Forest Hills posted on their Facebook page that they thought they wouldn’t be ready to go until April 1. The Kew Gardens Cinema also said they’d need a little time to get ready.
Also, Jersey City mayor Stephen Fulop announced last month that more money is going into the Loews Jersey theater’s upgrade and a commercial operator for the redevelopment plan was conditionally named. They’ll have to close for eighteen months beginning next year, but when they reopen, look out. Booking national acts to play there is on the long-term agenda, but Friends of the Loews will still be the non-profit partner and movies will still have a place there.
Unrelated but worth checking out: the 50 most beautiful cinemas in the world.
More on the other side.
Read more »
Posted by Rich at 7:00 AM 2 comments: