The Butlers & Maids Blogathon is an event that honors the domestic servants of film. Paddy and I thank you for taking part. You can find the roster of participating bloggers here and at her site.

I thought I had seen The Innocents before, when I worked in video retail, and maybe I did, but either it was on while I was helping customers and I couldn’t pay attention or I just forgot, because I would’ve remembered. This is one weird, freaky movie.

The only Henry James novel I’ve read was Washington Square and that was way back in high school, so I’ve never read The Turn of the Screw. It was published in 1898 as a 12-part serial in Colliers Weekly (with illustrations by one Eric Pape) and has enjoyed a long life, not only within academic circles, but in other media: it has been reincarnated as a ballet, an opera and a stage play. There have been film adaptations in multiple languages. Ingrid Bergman starred in a TV version directed by John Frankenheimer. A prequel was made called The Nightcomers. And references and homages to the story have popped up lots of places in different media. The Innocents, though, might be the best-known adaptation. 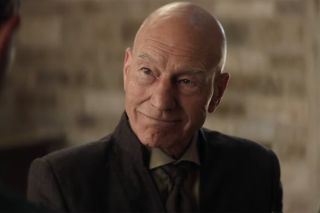 One thing I wasn’t prepared for regarding the latest Star Trek series was the hype. Discovery was an unknown property, with new characters in what was a kinda-sorta familiar Trek setting, but it wasn’t your parents’ Trek! It represented a new look and a more modern direction for the franchise, and while CBS gave it the hard sell, Fandom Assembled received it with a great deal of trepidation.

Picard has been different, and not just because it’s the return of a familiar and beloved character—its reach has gone lightyears beyond the fandom, and much of that is because of Patrick Stewart. In the eighteen years since the last TNG film, Nemesis, he’s become a huge celebrity, but it’s the kind where his real-world persona has become as important, if not more than, his roles: his presence on social media, his charitable work, his talk show appearances, his friendship with Ian McKellen, his knighthood. Virginia, who is not what you’d call a Trekkie, was giggling over that country music video of Stewart’s to the point where she actually bought the CD.

That’s exactly the sort of thing I mean. On the one hand, stage work aside, Stewart is ensconced as a genre actor now; he doesn’t make as many non-SF/F movies as he used to (Conspiracy Theory, LA Story, Jeffrey, etc.), but because his reach has extended deep into the mainstream, he has transcended Trek and genre in general in a way only William Shatner, and arguably George Takei as well, has done.

The difference, I think, between Stewart’s fame and Shatner’s is the former appears more selective in the projects with which he involves himself. No one will remember Shatner for things like $#*! My Dad Says or War Chronicles, but I think Shatner’s motivated very differently. Between the acting, the writing, the spoken-word CDs, the commercials, and more, he seems determined to do it all. Stewart doesn’t strike me that way. 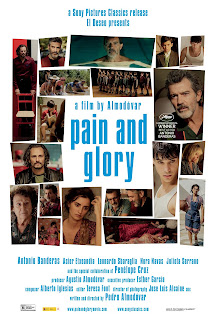 So. Pedro Almodovar. Can’t say I’ve ever been a huge fan. I don’t hate his movies, but I’ve never been particularly moved to rush right out to the local art house theater every time one of them comes out, either. During my video store days I watched Women on the Verge of a Nervous Breakdown and Tie Me Up Tie Me Down and was entertained by them. Maybe he was too European for me to grok—or maybe I needed more life experience. I dunno. I’d rather stick with Woody Allen.

As I recall, Vija and Andrea saw Pain and Glory when it first came out last fall. I had passed without even learning what the new film was about. I think they liked it. Then it got Oscar nominated twice, including Antonio Banderas for Best Actor, and it was re-released—and Virginia and Ann wanted to see it. Well, at least this time I had a little more incentive.

Banderas is a hypochondriac filmmaker in the late stages of his life. Unexpected reunions with people from his past alternate with memories of his childhood, involving his mother and other individuals. Less a plot than a loose connection of character vignettes, it works mostly because of Banderas. I’ll come back to him in a minute. 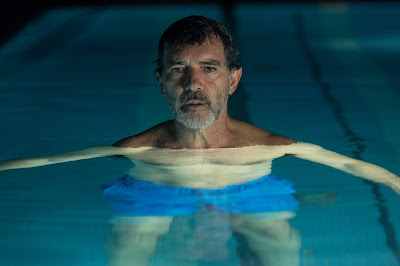 I can’t say for certain what distinguishes Almodovar as a filmmaker, but as I watched Glory I wondered how much of this story is autobiographical: Banderas’ character is internationally known, has never been to Hollywood, and has similar hair to Almodovar. The director says there’s only a passing resemblance, and I have no reason to doubt him; still, I was drawn to Salvador’s story as much as the way it was told: gently, compassionately, unhurriedly.

The layers of his life—his childhood; his relationship with his mother; his career and his estrangement from his star; his business partner; his former lover—are peeled back a little at a time and presented, warts and all. Aside from one early CGI-animated sequence describing Salvador’s numerous ailments, there’s nothing flashy here...

...just Banderas embodying a complicated person with vulnerability, dignity and pain. When he crossed over into Hollywood, they tried making him an action hero, and I dug him in movies like Desperado and The Mask of Zorro, but Glory reminded me of his more dramatic turns in films like Philadelphia and Evita. I think drama is a better fit for him. Glory is his seventh film with Almodovar, and after all these years, it would seem he handles Banderas better than anyone else. 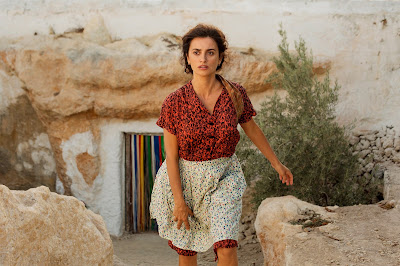 A few words about Penelope Cruz, who plays Banderas’ mom in flashbacks: like Banderas, Cruz also broke through in Hollywood. You may have seen her in Vanilla Sky, the American version of the Spanish film Open Your Eyes, in which she also starred. Recently she was in Kenneth Branagh’s version of Murder on the Orient Express.

I liked her in Glory; she had a Sophia Loren kind of vibe as a woman of the country, raising young Salvador in a domicile fashioned out of a cave—yes, a cave; that’s how she refers to it. In the opening scene, we see her washing clothes with other women by a river, singing songs. Her character is an important part of the story; later on, we see her, still in flashbacks, as an old woman (played by Julieta Serrano) and Banderas gets to interact with her in some very fine scenes.

The acting all around is quite good. In judging acting ability with foreign language actors, I find I respond more to things like physical presence and being in the moment than I normally might with English-language actors. Since I constantly have to have one eye on the subtitles, it helps to be able to read body language and tone of voice, something I suspect we take for granted when we can automatically understand the language being spoken. Anyway, good movie.


The THR obit. He was 103, if you can believe that. One of the last of the old Hollywood legends.

——————-
Films with Kirk Douglas:
A Letter to Three Wives
Lust for Life
Spartacus 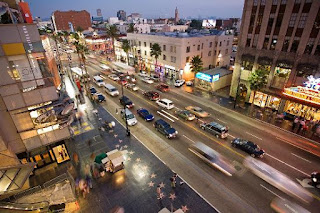 I don’t have a whole lot to say this month for once—except, of course, to remind you the Butlers & Maids Blogathon is later this month and there’s still time to join Paddy and me for it if you want. Leave a comment here or tweet me at @ratzo318 and you’ll be set.

Let’s get straight to this month’s links:

Aurora collects a bagful of Cary Grant appearances on the radio.

Ruth tells of how Edgar Rice Burroughs called out Hollywood in a novel.

More about the Parasite mini-series for HBO.

A Jewish critic on Jojo Rabbit.

Adam Sandler and the Safdie Brothers reunite for this short film set in Times Square.

Jojo Rabbit versus Ernst Lubitsch’s To Be or Not To Be.

Leonard Maltin will be feted at this year’s TCM Film Festival.

Comedy is dealt another mortal wound as Hank Azaria caves in to the PC Police and gives up voicing the character Apu on The Simpsons.

When the city of Hollywood hooked up with Los Angeles.

What is the most expensive horror movie prop of all time?