A Trip to the Moon

The Outer Space in Film Blogathon is an event about films set in space, hosted by Moon in Gemini. For a complete list of participating blogs, visit the link at the host site.

Eugénie opened the door and saw six solemn men in grey overcoats and suits. The white-haired one closest to her spoke.

"Bonjour, Mademoiselle. May we come in?"

Mère sacrée. They came after all.

"Of course." She widened the door and they entered one by one, removing their caps. Once they were all in, she shut the door. The leader took off his monocle.

"Struggling, but by the grace of God he lives still."

"Mademoiselle, I assure you if the doctor continues to cling to life, it is by the force of his stubborn nature, not any divine intervention." His scowl gave her a tremble. "May we see him?"

She felt her ears burn. You could at least say please.

The Death of Stalin 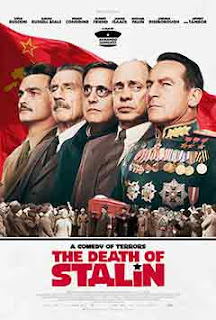 I'm gonna do a quick post about this one because I'm still a bit behind and I wanna catch up as soon as possible. This was Vija's suggestion, and if you've heard anything about it, you know it's gotten spectacular reviews.

Cold War-era Russia has been the subject of comedy before, but mining the demise of its most notorious ruler for laughs is a new one to me, and it's actually pretty good, no matter how little or how much you know about Stalin and his cabinet. You see the atrocities of the Stalin regime, but you also see the bumbling and the weirdness too — and one can't help but be reminded, to a certain degree, of the current administration here in America. 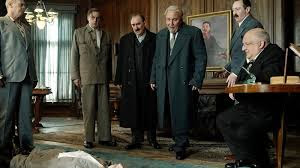 Director and co-writer Armando Iannucci lets the international cast (including Steve Buscemi as Nikita Khrushchev!) keep their native accents; no one speaks with a Russian accent, which lends a somewhat surreal aspect to the story, but hey, if black people can portray the founding fathers of America, anything's possible, right? 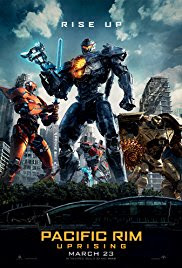 You know how in those old Godzilla movies, he stomps all over Tokyo but it's never as serious as it looks because it's SO OBVIOUS the sets are just models? Ever wonder what that might look like if it were real? Well, watch Pacific Rim: Uprising then, preferably on the biggest screen you can afford.

At first, seeing the jaegers (the robots) and kaiju (the monsters) battling it out amidst a giant cityscape is breathtaking as well as terrifying, though they do make a point of saying the population was safe in underground shelters, so one can watch the fights guilt-free!

After awhile, though, even these scenes have an air of artificiality to them, and not just because jaegers and kaiju don't exist (as far as we know). 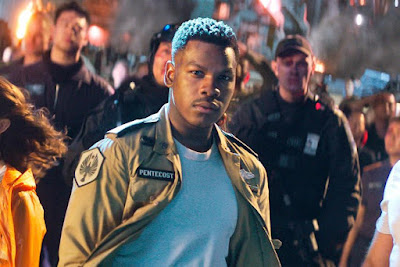 They're almost too real. Jaegers, when operated by their two pilots, run, throw punches, even get tossed around like humans, even though they're hundreds of feet tall. It's the old comics cliche: how can something so big move so fast? As for the kaiju, you can see every scale on its hide, every tooth in its wide, wide mouth, every drop of water as it rises out of the ocean.

There ought to be some sort of medium in which these kinds of movies can look better than dudes in rubber suits yet maintain a level of... I dunno, low-budget, B-grade cheapness, for lack of a better term? Then again, maybe I'm still wedded to the way SF movies looked like back in the 80s, when I grew up. I'm sure that puts me in the minority. Fine, I'm used to it. 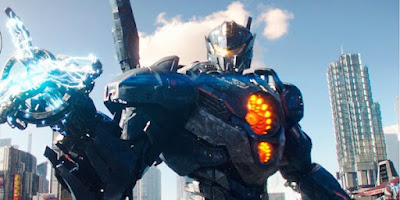 Uprising, regrettably, is little different from the first PR film. It wasn't until the final twenty minutes or so that I started to get into it. Eh. I knew this wasn't Black Panther. I just wanted a mindless action movie and that's what I got.

How about that John Boyega, huh? His ascension from no-name to rising action hero has been pretty quick, but that's what two Star Wars movies will do to you. Even when he played an inner-city hoodlum in Attack the Block, he had a certain magnetism that has turned into a youthful exuberance and strength that's nice to see. I hope he expands into other work: maybe a Shane Black-style crime comedy, or a Kathryn Bigelow-type war movie. He has definite potential. 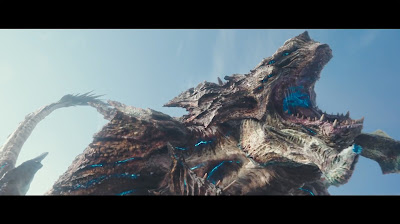 There's this young girl in my writers group named Anna who has been hyped for Uprising for weeks, talking about the actors, the director, the previous film, all sorts of details, etc. Last Sunday, we talked about the movie and wouldn't you know it, she was let down big time.

We both agreed that Boyega was great, but killing [SPOILER] was a tremendous mistake. Anna also hated [SPOILER]'s heel turn, though it didn't bother me as much because I barely remembered the character from the first film. She said she complained to director Steven DeKnight on Twitter, saying he should've gotten her to write the screenplay! I guess that's the risk that comes with high expectations. 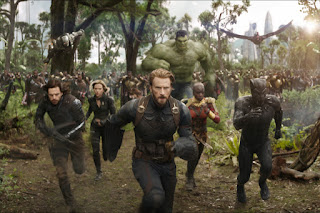 Lynn discovered a website for something called New Plaza Cinema, and it looks like it's built from the ashes of what was the Lincoln Plaza Cinemas. A group is looking to start up a new indie theater on Manhattan's Upper West Side. So far, they're still in the embryonic stage, but the fact this is in the works is encouraging.

So last month I met a multiple Emmy winner. Now I'm not sure if I should mention who it is, because of the circumstances: I met her at her home, where she and her husband host a soiree for musicians on a regular basis, but I think it's a private function. Nothing illicit went on; in fact, it was very sociable, a party, basically, but I don't know them, and I don't know how private their private lives are, so in this instance, I'm gonna play it safe. She won her Emmys for a TV show you all know and love.

Virginia invited me to this gathering. She plays an instrument called a viola da gamba (it's kinda like a cello) and she was part of a number of musicians and singers who put on a variety show, basically, playing classical music and modern compositions that sound like classical music. She also sang with a small group.

The Emmy-winning hostess has her awards on display on a shelf. I looked closely at the statuettes, but I was too afraid to touch them, since they belonged to a stranger and all. They're about a foot tall, maybe a bit more, and they're as elegant as they look. And they were the real thing.

I didn't get much of a chance to talk to the hostess about them because she was busy with other stuff, though I will say she was quite nice. Virginia has known her for awhile; they seemed really familiar with each other, as the hostess was with many of the people at the informal recital. So in my own personal Six Degrees of Kevin Bacon game, I can connect to some pretty famous people now...

Big thanks once again to everybody who came out and/or spread the word about the Time Travel Blogathon, and to Ruth for co-hosting with me. I knew time travel films didn't begin with The Time Machine, but there were more of them from the distant past than I realized, done in a number of ways, so this was enlightening. 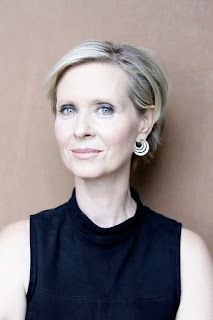 A few more words about Cynthia Nixon: I think it's absolutely fair to question her qualifications for holding such a high position as governor, especially New York governor, but at the same time, she's a citizen too, and if she thinks she's got the goods, then she deserves to take a shot. I admit, I'm giving her more of the benefit of the doubt than the former TV star currently in the White House, but then she seems to actually have a brain in her head.

That said, between Nixon, the Rock, Oprah, the girl from Clueless, and who knows who else, America does seem more preoccupied than ever with celebrities either running for office or flirting with the idea at least (though we're nothing compared with countries like India). If there weren't so many precedents, I'd suspect the current president opened the floodgates somehow; I dunno.

I would feel more confident about Nixon if I knew she had experience, I admit, but I'm willing to give her a chance to prove herself worthy. She's aware of the transportation crisis in NYC (which is about more than the local subways and buses and impacts more than just the tri-state area) and says she'll make it a priority of her campaign, but it's still way too early to decide if she can win.