H'wood eager to kill Bin Laden all over again 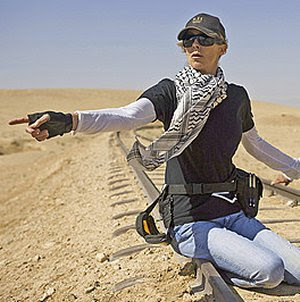 I've learned that Oscar-winning director Kathryn Bigelow in recent weeks has been preparing and starting to cast an indie movie with the working title Kill Bin Laden, while another movie project about the hunt for the Al Queda terrorist leader at a major Hollywood studio stalled back in 2006. Given tonight's startling news, it's clear that these may be the timeliest film projects in recent Hollywood history. And judging from tonight's showbiz phone calls coming into Deadline about Osama bin Laden's death, I wouldn't be surprised if the movie studios are anxious to bring these projects to the big screen as soon as possible, updated with the details behind tonight's successful military mission...

I found out on Facebook, of course. My first thought was, "joke." Then I saw other people posting about it. Even when I saw it on CNN.com I still couldn't entirely believe it, but there it was. I had reached the point where I was beginning to despair of anyone ever finding OBL - or even if finding him remained a high priority. Yesterday morning I watched a bunch of videos on the CNN site, read articles, tried to take it all in. I do feel relief, naturally, as well as pride in our military and our president in getting this important job done. I'm not sure I feel right about cheering anyone's death, but man, if anyone's death deserves to be celebrated...

So now we find that Hollywood is champing at the bit to capture the moment on celluloid (metaphorically speaking; I know that everything's digital now). Kathryn Bigelow's record speaks for itself; I trust her to make a great movie about this that will, perhaps, serve as a companion piece to The Hurt Locker.

One thing that I hope will not get forgotten, however, when these movies do get made, is all the lives that were lost in the past nine and a half years as a direct result of OBL and the events of September 11. That includes all the victims at the World Trade Center and the Pentagon, the Flight 93 passengers, the US soldiers in Iraq and Afghanistan, even the Iraqi civilians killed in the line of fire. OBL's death closes a chapter in world history (though don't let anyone fool you into thinking terrorism is no longer a problem), but it came at the cost of too many lives that were needlessly wasted, on both sides, and that's something we mustn't lose sight of in the rush to cinematically canonize our heroes.