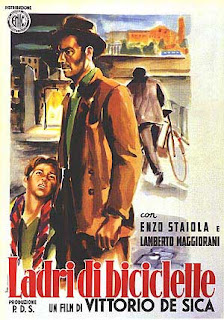 I never had my bike stolen when I lived in Columbus, though I did have several parts swiped. My night light got swiped twice. After the first time, I bought a smaller one, and after the second time I bought one even smaller than that, both times thinking that it would be less noticeable if it were smaller. That wasn't as weird, though, as having my seat swiped. It happened outside the main library in the downtown area. The library had bike racks in the front, and I'd always park and lock my bike there if there was room. One day I did, like any other day, and when I came out of the library hours later, the seat was gone! Naturally, I was pissed, but I was bewildered as well: why would anyone take only the seat?

When I returned to New York, I made it a point to try and gauge how often bikes got stolen here. I'd ask biker friends, do some reading, that kind of stuff. The conventional wisdom appears to be that having one lock is good, but having two locks is better. Singer and bike activist David Byrne, in his terrific book Bicycle Diaries, advocates having both a U-lock and a chain - the theory being that a potential thief would have a harder time trying to break two completely different locks.

May is National Bike Month, and this week is Bike to Work Week. In Columbus, biking as a form of transportation has slowly but surely made inroads towards acceptability, thanks to a mayor who fully endorses biking and activist groups who work towards making biking easier and safer. New York has made longer, bigger strides: in addition to installing hundreds of miles of bike lanes over the past few years, they've improved the city streets in other ways, such as installing pedestrian plazas in major intersections and creating bus-exclusive lanes. Some people think that all these changes make New York look too much like Europe - as if that was somehow a bad thing. 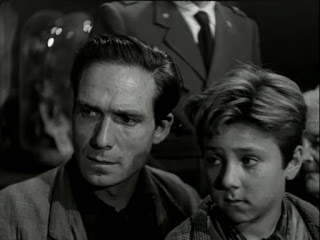 As I watched Bicycle Thieves last night (Thieves or Thief? I've seen it both ways), I paid close attention to the streets of Rome to see how they compare to the new New York. Of course, I don't know how much Roman streets have changed in 60-something years, but I figured it was worth comparing anyway.

The most remarkable element, of course, is the ubiquity of bike riders on the Roman streets. Ricci, our protagonist, is commonly seen with dozens of bikers mingling with car traffic harmoniously, for the most part. The cars don't appear to travel very fast; indeed, both cars and buses appear to be aware of bikes in the streets, though a couple of pedestrians get some close calls in the movie. In New York, while bikers are more visible than at any time before in the city's history, they still can't hold a candle to the amount of cars. Bikers intermingle with car traffic less thanks to the lanes, the protected lanes in particular.

While we don't see any protected bike lanes in Thieves, they do exist in other European cities such as biking mecca Copenhagen. They're great because they provide bikers of all stripes - male, female, young, old - with a greater sense of safety when they ride. All the bikers in Thieves appeared to be adult males and if not young, then in their prime. Again, it's probably different in present-day Rome. 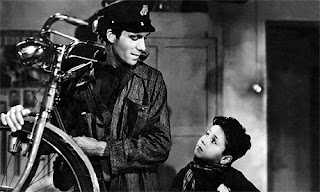 It's astounding to see that Ricci is not the only one who rides without any kind of lock. There's one scene where a crowd of people are coming from what looks like a sporting event, and as they exit the stadium and pick up their bikes, none of them appear to be locked either. One would imagine that Ricci's situation would be a common one in 1948 Rome. You'd think the police would be a bit more sympathetic.

In NYC there are many more bike racks, some of them sheltered, and most of the time, they're full to bursting with locked bikes. In Columbus, it was easier to find a space on a bike rack, but I also would use a parking meter if one wasn't available.

So while 1948 Rome certainly accommodated bikes in a way that 2011 New York and Columbus haven't quite reached yet - in both cities (especially New York), there's still resistance from influential public figures and regular citizens who aren't ready for bikes to share the streets with cars - it didn't have the modern infrastructure necessary to make biking as safe an activity as it should be, which leads, of course, to Ricci getting his bike ripped off. But of course, if that doesn't happen, there's no story.
Posted by Rich at 11:13 AM