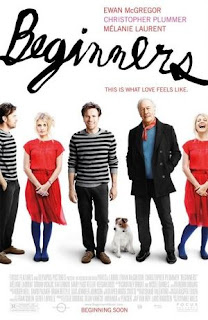 Beginners is the new Ewan McGregor movie that I was fortunate to have seen in an advance screening last night. One of the many different hats Reid wears is that of an actor; he's a SAG member who has had small appearances in a few films, the last one being Spike Lee's Miracle at St. Anna. Anyway, as a SAG member, he and a guest were invited to this showing at the Chelsea Clearview in Manhattan (the same place I saw Black Swan). He had spent the entire day at the Book Expo and was burdened with two bags full of books, yet he was determined to see this movie, in part because there would be a Q-and-A with co-star Christopher Plummer afterwards.

There was some question as to whether we'd actually make it in, though. People RSVP'd for the screening in a flash, but seating apparently was based on that and not first-come first-served. Reid RSVP'd late, so he believed that unless someone failed to show at the last minute, we wouldn't get in. Once we got to the box office, there was some confusion as to where we were supposed to wait and for how long (there was a huge line which I was afraid we'd have to get on, but it was for something else), but once Reid established his credentials and confirmed that he did, in fact, RSVP for this show, we got in.

For a multiplex, I have to admit the Chelsea's not bad. It maintains a local feel by showing movies that play to the gay-borhood (such as this one); the seats, while not arranged stadium-style, are very comfortable and roomy; and if you don't want to buy popcorn, there's now a small cafe in the lobby (with WiFi). 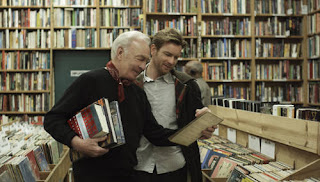 Earlier this week, an article in the Boston Globe exposed the practice of theaters with 3D projectors showing under-lit 2D movies. As a result, during the movie I kept looking up at the projection booth for one of the telltale signs of a 3D projector lens: dual light beams. As best as I could tell, I only saw one. We were seated in the center, a little towards the rear, so the view was as good as it could get. (If you haven't read the article, I highly recommend it. It's quite an eye-opener.)

Plummer and McGregor are father and son. When Plummer's wife dies, he reveals that he's been gay all along and decides to live the rest of his life as a gay man. Then he dies, and McGregor's out of sorts for awhile, until he meets Melanie Laurent and things change for him. The movie cuts back and forth through time, from the present to the near past to the distant past, when McGregor's character was a kid. It's inspired by director Mike Mills' father, who also came out late in life. It's got a lot of too-clever-by-half Wes Anderson-like storytelling gimmicks, which I thought was a bit excessive at times, but on the whole I liked it, especially Plummer... 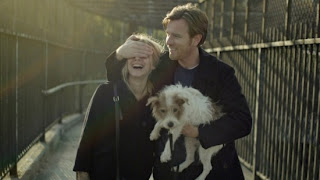 ...who, as I said, was in person for a Q-and-A with New York Magazine's David Edelstein. Plummer said his role in Beginners was very liberating for him, especially when he realized he didn't have to worry about playing Mills' actual father. He was told to interpret the role the way he chose, which he loved. (Plus, it was nice to not see him as a bad guy for a change.) He also talked at length about his career, especially his early days in theater, and as you might imagine, shared some funny stories. One could tell this was a crowd of actors because they reacted warmly to the names of old theater actors Plummer referred to, many of whom were unfamiliar to me. Reid tried to record the interview, but security busted him. He said he got enough, though.

A late dinner afterwards and that was it.
Posted by Rich at 9:29 AM