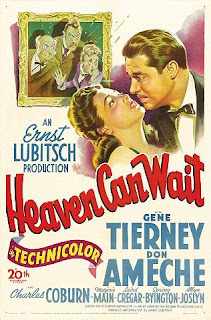 If there is an afterlife, which I doubt, and if I am expected to make some sort of account of my life in order to determine my ultimate fate, I doubt I would come out on top. I suppose I would characterize my life to be not unlike the protagonist of Heaven Can Wait: no crimes, but a lot of misdemeanors. The notion of being able to bargain for one's fate after you die seems like wishful thinking, although I suppose it depends on what belief system you subscribe to. It's just as likely that you'll come back in another life as someone (or something) else.

I'm reminded of the Albert Brooks movie Defending Your Life, in which Brooks reaches a secular bureaucracy of an afterlife in which he must negotiate for the right to move on to... wherever it is he's supposed to move on to... based on the things he learns upon reexamining his life. That was a non-denominational, non-religious interpretation of the afterlife, though. Here, as the film's title makes clear, it's all about the Christian hereafter.

That said, would the Devil (if he exists too) be as pleasant and agreeable as he is in this movie? He's supposed to be the bad guy, right? Therefore any appearance of affability and gentlemanly charm should only be an appearance, to mask his true intentions. Of course, it's never explicitly stated that this is the Devil, but who else can it be? 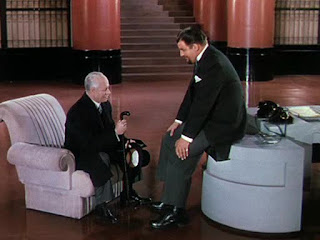 Don Ameche's character Henry, like Will Ferrell's character in Stranger Than Fiction, is willing to entrust his fate to a greater power, and in both cases, they're granted pardons out of pity. While Henry is not as great a scoundrel as he believes himself to be, he's no saint either. I mean, he stole his cousin's fiancee from under his nose and clearly didn't regret it. (Sure, his cousin was a brownnose and a snitch, but still.) But of course, Christian theology, as interpreted in this movie at least, doesn't allow for shades of grey. Henry's going either to heaven or hell. If it were me, I would've sent Henry back to Earth in another life so that he can try again.

Still, this was a pleasant enough movie, with some funny moments. Peter Bogdanovich recently wrote in his blog about director Ernst Lubitsch, which made me want to see it. Prior to this, I think the only other Lubitsch film I had seen was Ninotchka. I plan to watch a few others in the coming weeks.
Posted by Rich at 11:17 AM