Stranger Than Fiction vs. The Truman Show 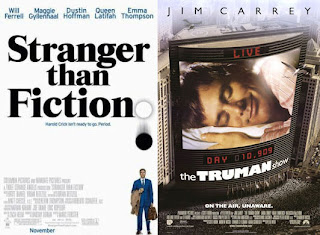 I used to prefer Will Ferrell in small doses. When he was still doing supporting roles in films like Dick and Jay and Silent Bob Strike Back, I liked him better. Then he became a big star and made comedies that didn't appeal to me as much. I never hated him; he simply didn't matter to me. When he came out with Stranger Than Fiction, I passed on it because it reminded me too much of a movie I love, The Truman Show, and while I'm cool with Ferrell trying something different, I didn't think this was the answer. Lately, however, I've been given cause to give the film a try after all. I still found myself comparing it to Truman, though, so I'm gonna take a different approach with this post: I'm gonna talk about both movies and see how they match up. I've seen Truman many times, so I can easily talk about it from memory. I watched Fiction last night through Crackle.

Both movies have notable directors - Marc Forster and Peter Weir - who are able to curb Ferrell and Jim Carrey's comedic tendencies without completely eliminating them. I like it this way, which is why I prefer Robin Williams in Good Morning Vietnam and The Fisher King than in Good Will Hunting and One Hour Photo; the latter two roles, while very good, don't feel as tailored to Williams' specific strengths as the former two roles. Ferrell's Harold seems like a straighter role than Carrey's Truman, but both actors do surprisingly good work. 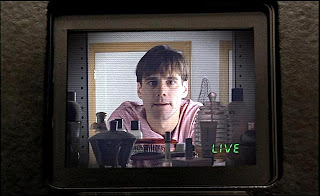 Both movies take a fantastical premise to sincerely explore the concept of fate. Harold and Truman are likable everymen who become aware of outside elements that appear to direct their lives, and both of them fight for the freedom to choose their own destinies. Truman plays up the religious angle more; Ed Harris' Christof comes across like an aloof demigod, one who even lives in the "sky" above Truman, and in the film's final act, the conflict between Truman and Christof takes on the level of a Biblical confrontation between man and God. Fiction is more grounded in the real world despite its unusual premise. (A movie from earlier this year which treads similar ground, The Adjustment Bureau, falls somewhere in between; the spiritual element is hinted at in places, but isn't as explicit as it is in Truman.)

Both protagonists' lives are fodder for public entertainment. In Truman, we see how the entire world faithfully follows Truman's daily exploits on television. In Fiction, Emma Thompson's Karen is in the process of creating the book of Harold's life (and death), but we're led to believe that this book, once it's completed, will be her masterpiece. 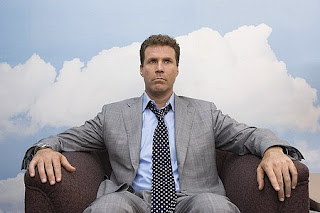 Perhaps the biggest difference between these films is the resolution. In Truman, once Truman discovers the artifice of his world, nothing stops him from breaking down its barriers and escaping. That's the driving force throughout the movie. Christof loses control of the narrative of Truman's life, and fights to regain it, but at every turn he acknowledges that Truman does have free will and that he can write his own ending if he really wants to - which is what he does in the end.

I've often wondered why, if there is a god, he would want to keep humanity subservient to his will and not let us expand our knowledge as far as it can go. Could it be because we're more entertaining that way? If so, then free will can't be anything more than an illusion. Truman, however, proves that theory wrong by fighting for the right to choose - and winning. Does this mean God is fallible after all - or that his creation, humanity, has outgrown the need for him? Children generally outgrow the need for their parents, yet we continue to cling to God, or the idea of God, as stubbornly as ever, at the expense of genuine enlightenment and growth. This past weekend's so-called rapture business is a perfect example of that. 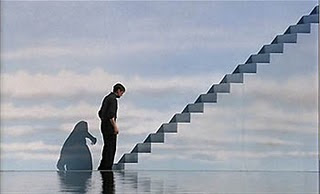 In Fiction, once Harold meets Karen and learns what fate awaits him in her book, he accepts it. The story of his life had been unremarkable until he learned that Karen was controlling it, and upon learning that the death she had planned for him would not only be immortalized in her book, but would be a memorable one, he was okay with that, even though it would mean giving up the taste of life he had recently experienced up to that point: breaking free of his routines, fulfilling childhood fantasies, falling in love.

A major characteristic of the ancient Greek myths is the ability to live one's life fully aware that the gods have plans for you, and that those plans may not always be to your benefit. The Greeks believed that one couldn't fight fate no matter what one does, and their greatest tales bear this out. If God is only interested in us for our entertainment value, then our lives have no intrinsic value to him, yet that doesn't stop millions of people from committing questionable acts at best and horrific ones at worse, in his name. Karen, however, is no god, just a mortal woman who feels tremendous guilt once she faces the fact that her character has a life of his own - one she was about to take so that she could have a best-selling book. 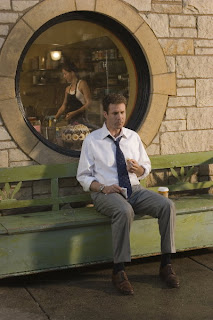 Fiction and Truman are both excellent vehicles for two modern comedic talents to stretch their acting legs, surrounded by strong supporting actors, engaging scripts and sure-handed directors. I still give Truman the edge though. There are parts of Fiction's premise that are fuzzy to me. Was Harold unique among Karen's characters? That is, was he the first one that had a life beyond the confines of a book? Karen seemed to think not, but the movie doesn't say for certain. There's less of a sense of urgency in Fiction. Truman builds and builds towards an incredible climax as the stakes keep getting raised. And while Ferrell's performance is quite good, I believe Carrey's is better.

Anybody else seen both movies?
Posted by Rich at 9:43 AM