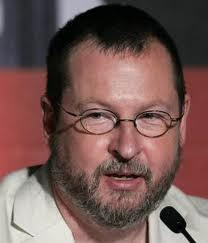 The creator of Antichrist and the helmer of Taxi Driver will collaborate on their next project. Danish director Lars von Trier and Oscar-winner Martin Scorsese are teaming up for a remake of The Five Obstructions, von Trier's 2003 documentary deconstructing the film making process.

In the original Five Obstructions, von Trier challenged fellow Danish director Jorgen Leth to remake his 1967 short film The Perfect Human five times, each time giving him a set of strict rules, or obstructions, that he had to follow.

So how about that Lars von Trier, huh? Yeah, so, by now the whole story about him putting his foot in his mouth at Cannes this year has been discussed to death, so there's no need for me to get into it. What I wanna talk about is this collaboration of his with Martin Scorsese. I haven't seen the first Five Obstructions film, but the idea behind it - coming up with different ways to make the same movie - does seem like a fun experiment, the sort of thing you might encounter in film school, perhaps. And I think if it could be done with a few other notable directors, it could even be beneficial. So Lars, if you're reading this, maybe you could hook up with these guys after you're done with Scorsese:

- Michael Bay. Get him to remake Transformers with a crew of third-grade schoolchildren providing the visual and sound effects. I can just imagine Shia LaBeouf running from a 7-inch TF action figure held up in front of the camera by a 6-year-old while a bunch of other rugrats are off in the background making "Pweew! Pweew! SCHBLOOOOMMM" sounds to simulate explosions!

- M. Night Shyamalan. He could remake The Sixth Sense with Bruce Willis covered in a white sheet with two eyeholes, forcing him to rely on another way to make the movie interesting besides the shocking twist ending!

- Tyler Perry. He can remake... any one of his films, really, it doesn't matter... with all the female roles played by men in drag. Why should Perry be the only one?

- Tim Burton. Have him redo Alice in Wonderland, only this time have it set in a Madison Avenue office building, with everyone dressed in modern business clothes. See how long it takes before he goes out of his mind!

- George Lucas. He can remake The Phantom Menace on a "black box" stage with only a bare minimum of props. Maybe being within such an environment will encourage him to let his actors act the way we know they can when they're not in one of his films!

Further suggestions are welcome.
Posted by Rich at 10:33 AM