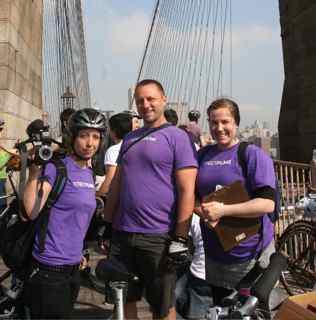 ...Mark Gorton, a major donor to T.A. and founder of LimeWire... had started to take an increased interest in transportation and was particularly concerned about how dangerous it was for New Yorkers to cross their streets, ride a bike in traffic, and to find quiet, open spaces to relax in near their homes.

Mark was eager to accelerate the public’s learning curve on transportation issues and realizing the amazing potential of video’s influence he met with Clarence to discuss his advocacy film work. Soon after he hired him to produce shorts about communities' struggles to make their neighborhoods safer from traffic. Much of this initial phase was very critical of government and documented the difficult, on-the-ground conditions for pedestrian life of New Yorkers.

National Bike Month is a time to celebrate the benefits of bicycling. As gas prices continue to rise, and as the search for oil continues to wreck the environment, it has become more imperative than ever to encourage alternate means of transportation that reduces our dependency on oil. In New York and elsewhere, the bicycle has enjoyed a renaissance in popularity as a way to get around, thanks to an investment in infrastructure that makes it easier to do that - primarily, bike lanes.

There have been formidable obstacles, however. Here in New York, the local news media has stirred up anti-bicycling sentiment based on misinformation and speculation, while wealthy individuals with ties to prominent political figures have challenged the authority of the Department of Transportation and local community boards who, at the request of the neighborhoods they represent, have lobbied for and received bike lanes. In addition, the police, undereducated about bike laws in general, have targeted bikers for victimless traffic infractions while cars kill and injure pedestrians on a weekly, almost daily basis.

Counteracting the media's distortions with facts and providing much-needed education about biking and other aspects of the livable streets movement is filmmaker Clarence Eckerson Jr. and the crew of Streetfilms. For close to a decade, Eckerson's short films have documented the progress of biking in New York, interviewing politicians, activists, community leaders, specialists, and of course, bikers from all walks of life. In addition, Streetfilms has covered other aspects of transportation, such as the experimental Bus Rapid Transit program, as well as other changes to city streets, such as the new pedestrian plazas in Times and Herald Squares.

Streetfilms has gone national, covering similar movements in other American cities such as Portland, Seattle and San Francisco; and even international, doing the same in countries such as England, Colombia and Denmark. The goal is always the same: to present the facts that make the case for alternate transportation and safer streets.

Here are five examples of the kind of work Streetfilms does.

Bike vs. Car vs. Transit

Any regular bikers out there?