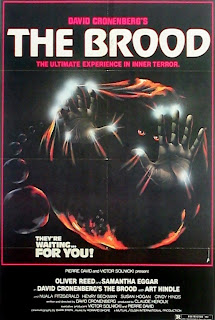 I used to always confuse David Cronenberg with David Lynch. I suppose it was the first names that did it. They still trip me up occasionally, though not as much. Cronenberg, of course, is the guy who has made a career out of making films about body mutilations and transformations. It's a good subject for a horror filmmaker to explore. Most people will likely agree that normal bodily functions are gross to begin with. When you search for different ways to twist and reshape the human body in films, I think you're getting into primal-fear territory.

Feminists probably had a field day analyzing Cronenberg's The Brood, a film I read about at a terrific horror movie site called Kindertrauma, which specializes in childhood fears. Mentally-unbalanced woman undergoing radical psychotherapy which causes her anger to manifest as little mutant children that kill anyone she's pissed at? Yeah, I can see feminists reading some interesting things in a story like that.

The Brood came out the same year as Alien, another movie in which human bodies are the vessels for violent, murderous offspring. The tie to one's emotional state, however, makes me think of another angle: the notion of a cycle of violence linking familial generations - the children carrying on a battle begun by the parent. And because children are so easily mutable, it's easy for a parent to mold them in their image, for the express purpose of carrying out their bidding. In the movie, Nola's maniacal rage leads to her mutant children threatening the life of her natural daughter, and that's the danger of vengeance, isn't it? Left unchecked, it could consume everything in its wake. 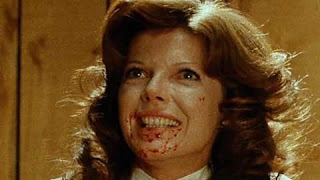 It's unfortunate that The Brood is told from the perspective of Nola's husband Frank. Hers is the more interesting story - and because we never see her prior to her commitment to psychiatric care, every time we see her she's either nuts or in therapy to keep her from going nuts. The treatment she goes through made me think of Scientology at first: a charismatic leader who isolates the subject from their family; former subjects who escape with mental (and physical) scars; the whiff of a cult about it. I would've liked to have known how Nola got caught up in it.

Plus, we never see Nola with Candy, her natural daughter, so we don't get a sense that Nola ever cared about her to begin with. She seems to embrace her transformation - again, something I would've liked to have seen more of, especially when she seems to hold her mutant offspring in higher regard than her natural one. The more I think about it, the more it seems like a mistake to not show more of her side of the story. Awesome climax, though.
Posted by Rich at 9:59 AM