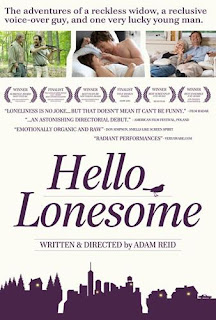 Hello Lonesome was an unexpected last-minute change to my schedule. Before I get into it, though, let me briefly tell you about my weekend, because I had a good one. I spent Saturday morning biking on Governor's Island, a tourist attraction island located in the East River, southeast of Manhattan. It was the first time I had been there with my bike. I left early, riding to the subway. Normally it would only take two trains to get there, but this being the weekend, construction schedules messed that up completely, so I had to carry my bike up and down more stairs than I had anticipated.

Eventually, I made it to the ferry and from the ferry to the island. It's small, but I got to see parts of it I hadn't seen before. It was really hot, though. I had originally planned to go back home and then come back out, but by the time I got home, which was sometime between four and five, I was far too wiped out to consider going back out. I just plopped on my bed for the rest of the day. It was a good tired, though.

Then yesterday I was with Andrea! She called me on Saturday inviting me to see Hello Lonesome for a specific reason: one of the actors in the film is a friend of hers. I was gonna call her to see if she wanted to hang out on Sunday, but she beat me to it, so that worked out fine. Sunday was another hot one. After so many long weeks of 50 degree weather and rain, this past week has been a pleasant surprise. It finally feels like summer. I wore shorts on Saturday, but not yesterday, and I should have.

There's not a whole lot to say about Cinema Village as a theater: it's tiny, with only three auditoriums and a lobby that can just barely be considered one. It's one of the seminal art house theaters in the city, however, and has been around for many years, and yesterday it had a decent-sized crowd for an early-afternoon show. Writer-director Adam Reid was in attendance all that weekend for after-show Q-and-A's, and I think many of the people at our show were friends and acquaintances of his. 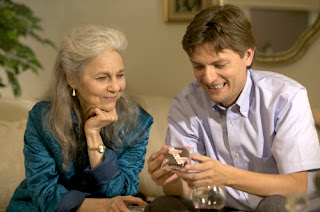 Lonesome is a triptych of stories about people coping with loneliness in different forms: a father estranged from his daughter after his wife leaves him; an old widow who takes up with a much younger man, and a young couple whose relationship is tested when the girl gets cancer. Andrea's friend is Kamel Boutros, who plays a delivery guy who befriends the father. (That's him on the poster, holding the rifle.) He only has a few scenes, but they're good ones. He even gets to show off his singing ability in one. The acting is superb practically across the board in this movie, although the cinematography is not very strong. There are some odd editing choices and poor camera angles that bring the film down in places. It's a decent movie overall; nothing spectacular, but made watchable by the strong acting.

Reid appeared afterwards and he talked about his movie. It was shot in fifteen days for $50,000 and took over a year to complete. It was originally going to star Craig T. Nelson as the father, who works as a voice-over announcer. Reid, a commercials director, ultimately chose to take a chance on an actual VO man, Harry Chase, in what would be his first on-screen role. In 2010 Lonesome hit the festival circuit and won a few awards, and Reid said the film is now available online (I forget whether he said iTunes or not). 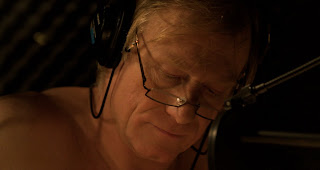 Afterwards Andrea and I wandered around the Village. She told me she saw Tree of Life already and was less than impressed with it, and now I'm no longer sure if I wanna see it. (I guess you'll find out in the coming weeks if I change my mind.) There was a street art fair we looked at, but we spent most of the afternoon in Washington Square Park listening to a group of musicians singing oldies songs. At one point, when we were on our own, we tried singing some oldies ourselves, even though neither of us are exactly candidates for American Idol, but we kept forgetting or misremembering the lyrics. (I think we had this problem the last time we tried this too!) Slightly embarrassing, perhaps, but still fun.

I'm just so glad summer-type weather is finally here. It felt like it would never arrive.

So how was your weekend?
Posted by Rich at 9:54 AM