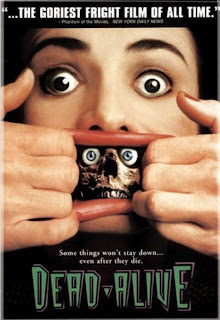 So how about that Peter Jackson, huh? I still remember when he was named the director for the Lord of the Rings trilogy. The only other work of his I had seen to that point was The Frighteners, which I liked, but I couldn't help but wonder if he had what it took to handle something on as huge a scale as the Rings movies. I probably wasn't the only one who thought so, either. I think it's safe to say he not only met, but exceeded, expectations. Now he's a part of the geek pantheon of directors: Spielberg, Lucas, Cameron, Nolan. Looking back at his early days as a director, though, it's hard to imagine that he would reach such heights... especially when you consider a movie like Dead Alive.

The monster mommy here is an old lady who keeps her son Lionel on a very short leash, to the point where it interferes with his burgeoning love life. Then one day she gets bit on the arm by a rabid animal from a mystical island, dies, and becomes an undead zombie (making her a literal monster mommy). And things get a hell of a lot worse. 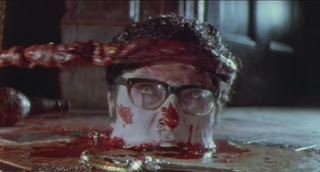 I hadn't planned on watching this. It was a last-minute substitute. I had heard of it before, going back to my video retail days, as a matter of fact, but never got around to seeing it. All I knew about it was that it was a bizarro horror flick from Jackson's early days. I was reminded of it while looking through Kindertrauma (once again), looked it up on IMDB, and gave it a shot, not giving it too much thought because I needed something to watch quick.

Well, I've seen it. And I'll tell you this much:

I no longer feel like I need to watch another zombie movie... ever... again. 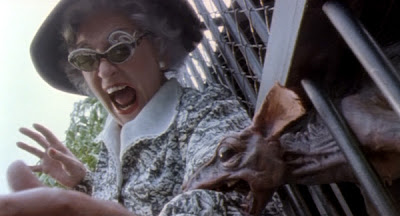 How can any other zombie movie top this? This makes Night of the Living Dead look like Bambi! Half of the time I was literally holding my laptop out at arms length away from me. I started out watching it in full-screen, but after awhile I reduced the window size to normal because I really, really did not need to see things like eight miles of zombie guts, unnatural bodily fluids, and especially zombie sex up close.

Dead Alive reminded me a whole lot of Sam Raimi and the Evil Dead movies. Like Raimi, Jackson uses a lot of quick, swooping camera movement from skewed, exaggerated angles. In Jackson's case, however, the action is breathtakingly quick and edited fiercely, to the point where it's a bit hard to keep up at times. It's an approach that he's since curbed, though his King Kong had some of it. (Speaking of which, Jackson has said that the original King Kong was the reason he became a filmmaker, and the opening scene in Dead Alive appears to be a shout-out to that classic monster movie.) 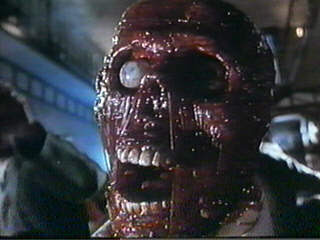 I freely admit that I'm a wuss when it comes to watching cinematic gore, so it helped somewhat that Dead Alive was also pretty funny. I mean, once the zombies start multiplying and the carnage increases, things go way over the top to the point where it's fun-scary, but even before then it's clear that the whole thing is intended to be a romp. Anything goes in this flick - and it often does. I mean, look at what happens to Lionel's mom towards the end...

Seriously, I don't see what more you can do with zombies after this except to go in the completely opposite direction, Walking Dead-style, and make it all brutally serious and bleak - which has its merits too.

Previously on Monster Mommies Week:
The Brood
The Baby
Posted by Rich at 9:13 AM