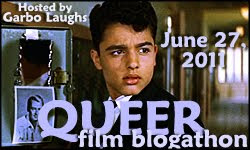 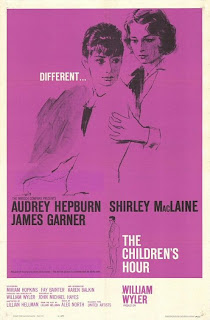 The Queer Film Blogathon is a month-long event celebrating gay cinema presented by the site Garbo Laughs. For a complete list of participating blogs, visit the host site. The final list of blog posts will go up June 27, 2011.

On more than one occasion, I've tried to imagine what it's like to be gay. In my life, I've had little luck with the ladies, and it's made me not-so-idly wonder every once in awhile whether I'm playing for the wrong team, so to speak. They say that sexuality is genetic, so perhaps it's not as easy as flipping a switch in your head, and anyway, I've never been curious enough to take that chance. I'm reminded of the rationale used by Joey Lauren Adams' character in Chasing Amy: she fooled around with girls in addition to guys because she didn't want to take the chance that she might miss out on The One, even if The One was another girl. I have no idea how much credibility this holds amongst gay people in the real world.

It seems to me that homosexuality comes with many of the same hopes, fears, risks and rewards as heterosexuality. There are profound differences, of course, but I think we put too much emphasis on them. In watching The Children's Hour, I see Shirley MacLaine's character Martha as gay, of course, but I also see her as a woman who loves someone she knows she can't have. It's irrational, but she can't help it because it's how she feels, and that is without question something I can easily relate to.

Martha's story is a tragedy, but the real tragedy is that little has changed fifty years later. As we saw last fall, young gay people are still being made to feel shame over what they are, and they are killing themselves over it, which is why support networks, whether online or off, are so important. I have no doubt that Martha felt all alone, even in the presence of Audrey Hepburn's Karen, her best friend - who was getting married. If Martha had someone she could rely on who understood what she was going through, things might've worked out differently for her. 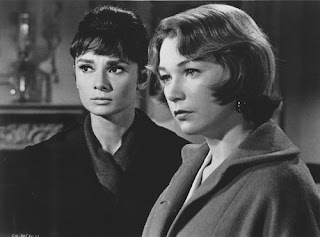 I first saw Hour when I was working video retail. It was Bill who played it, whom I've talked about before. I cried at the end, of course. Eventually I bought a used VHS copy of the movie, which I would've played the other day except my VCR died awhile back. I suppose I could try to find some place that still fixes VCRs, but even if I did, then what? I've only got so many VHS tapes and it's not like there's ever gonna be more - and I really hate having to re-buy the same movie over again in a different format. I may have to, though.

Look for more posts in this series here at WSW later this month.
Posted by Rich at 10:00 AM