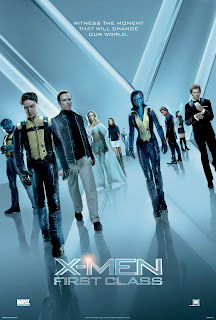 I was gonna wait until later this month to write about X-Men: First Class; in fact I was gonna pair it with Green Lantern because I figured I used up my "A" material in writing about the first X-Men movie. As it turns out, however, I do have something important to say about this movie - something that can't wait.

First, I should say upfront that this was very well made. Director Matthew Vaughn is the real deal, and seeing this makes me wonder what X-Men: The Last Stand would've been like in his hands. James MacAvoy and Michael Fassbender are superb as Xavier and Magneto, respectively, and Vaughn did the right thing in making their relationship the focus of the movie. At one point I found myself thinking that this is what the original movie should've been - not so much in terms of casting, but characterization. And the cameo appearance by you-know-who was AWESOME (and an actual surprise!). Ultimately, though, I was let down in a big way, and here's why.

There are a lot of new characters in First Class, some I recognized from the comics, some I didn't (Nightcrawler has an evil twin brother now?). One new character is a guy named Darwin, played by Edi Gathegi. Don't know anything about him. IMDB says he's from Kenya, he was in the first two Twilight movies and he was even in Atlas Shrugged (god help him). So this movie was definitely a step up.

Darwin's power is to "adapt" to any threat to his survival (get it?). We see him stick his head in a fishtank and grow gills to keep from drowning, for instance. That sounds like a really useful power. I didn't know this character was even going to be in the movie. I'm not one of those fanboys that has to follow every single aspect of movies like this up until opening day. Still, I figure, fine. Didn't give it another thought once he was more or less established. So what happens?

He dies. The only good-guy character to die and OF COURSE IT'S THE TOKEN BLACK GUY. His death makes no sense, either: Kevin Bacon and his minions track down Xavier's new recruits and they try to fight him. One of the new mutants can project energy blasts from his chest in concentric rings, but Bacon's character's power is to absorb energy and project it back, which is exactly what he does. He takes that energy and shoves it down Darwin's throat, which explodes inside him and kills him. If Darwin's power is to take on whatever traits he needs to survive... then why didn't he survive? A power like his should make him impossible to kill. Maybe he gets seriously hurt and it takes him a long time to recuperate, but that didn't happen. And of course, he's forgotten about for the rest of the movie.

I saw it happen and I couldn't believe it. I couldn't believe that in 2011, Hollywood movies are still using this tired cliche. It took me right out of the movie for a moment and it made me mad. Minorities in general have become even more marginalized in the movies today than ever before, so there's a tendency to want to latch on to them even closer in movies like this because one never knows how long we'll get to see them. Darwin's death is ridiculous because he didn't have to die, and it's insulting because it continues a long and frustrating trend that has been going on for decades.

But wait. Darwin's not the only character of color in the movie. Another new character is a chick named Angel, played by Zoe Kravitz, daughter of singer Lenny Kravitz (and Lisa Bonet). IMDB says she's been in a few things, including Jodie Foster's The Brave One and the TV show Californication. Her character's mutant power is to fly with insect-like wings and to spit globs of energy (ew). She joins Bacon after he gives the new mutants the "Why fight for a world that fears and hates you" speech. Maybe it's a ruse and she'll betray them in the end, I thought. She doesn't. She sticks with Magneto through the rest of the movie.

So let's add it up: two characters of color - one dies and is quickly forgotten, the other is an unrepentant turncoat who has no qualms about fighting her former friends. Great! Thanks, First Class! Thanks a lot. 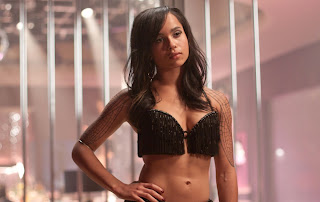 The irony is that ever since the late 70s, when writer Chris Claremont took over the comic book, the X-Men have been known for their diversity. Mutants from all different parts of the world have been part of the team at one time or another. And as for the original trilogy of films, well, say what you will about Halle Berry as Storm, but she was front and center in all three movies and she mattered.

I can't stress enough how frustrating it feels to have a movie that I was genuinely looking forward to be ruined in this way. And like I said, everything else about First Class was good (except Emma Frost; how can you take such a strong, sophisticated character and turn her into vanilla pudding?). I'll probably be the only person to even bring this up, but if I am, then so be it. I'd rather that Darwin wasn't in the movie at all than to see him disposed of and tossed aside so cavalierly, to join the great big pile of disposable black characters in movies.