Five ways for theaters to get butts back in seats 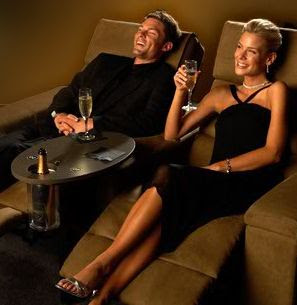 AMC Entertainment’s “Fork & Screen” theater program is the equivalent of business class on an airplane: not quite as posh as first but offering plenty of amenities. For a few dollars more than the price of a regular ticket, AMC patrons are treated to upgraded seats equipped with a personal call button they can use to order food and drinks. The menus include everything from jazzy cocktails to appetizers (the crab Rangoon dip is recommended) to pizza and pasta.
As moviegoers start to ask not just “What’s playing?” but also “What’s on the menu?” theater circuits -- even the two biggest chains, AMC and Regal -- are aggressively experimenting with upgraded services in the never-ending search to boost traffic and improve the bottom line in the fight to get audiences to leave their homes. Catering to audiences’ appetites is also seen as one of the best defenses against letting Hollywood studios dictate the rules in a new world order of VOD and windows.

I will attempt to resist going for the "make better movies" cheap shot in discussing the struggle to boost movie attendance. Truth is, if I could watch first-run movies on demand in the comfort of my own home on my digital HD flat-screen TV with surround-sound, I'd do it. (Y'know, if I, um, had any of that stuff.)

Improving the menu is certainly a good idea, as are reserved seating and even wait service, and while I, as a moviegoer, wouldn't take advantage of those options every time, it might be nice for a super-special movie, or for a date night. Last week we talked about variable ticket-pricing as an idea, one I do believe ought to be experimented with in some form.

Still, there are some more fundamental issues with the moviegoing experience that I feel need to be addressed if theaters - and by extension, studios - want more patrons.

- Enforce a zero-tolerance policy on cellphone usage. I don't think I have to explain this one, do I? If it means installing infra-red cameras in auditoriums, if it means having ushers patrol the aisles every fifteen minutes, if it means generating a small electromagnetic pulse, theater staff seriously need to curtail cellphone activity during a film and make it stick. It'll mean hurt feelings for some people, but you can always call the cops if somebody gets violent.

- Provide a babysitter service. You can charge an extra dollar or two for it, but it's as simple as providing a chaperoned room with toys and maybe a Spongebob DVD or two for the little brats to watch while their parents are watching Saw 28 or whatever. Make it clear that this is a house rule for any film rated PG-13 or higher. Also, and this needs to be enforced at the box office, if a parent with toddlers wants to see a PG-13-or-higher movie and is unwilling to use the babysitting service, then they can't get in. Period. 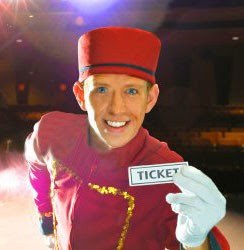 ack options. Recently, theaters have bristled over the possibility that they may have to disclose calorie counts for their snacks, popcorn in particular. While we acknowledge that concessions in general are huge money-makers, and in all honesty I wouldn't want popcorn to disappear from theaters, no matter how many calories they may contain, I see no problem with also offering things like fruit, yogurt, power bars, and similar items for those that want them. It's an idea whose time has come.

- Always provide a 2D option for 3D movies. Some theaters don't do this. I'd imagine most of them are smaller and want to maximize the amount of 3D showings, but not everyone is interested in seeing movies in 3D, especially if they're Clash of the Titans-style transfers from 2D. If it means having 2D screenings only on weekdays before 5PM, that's fine, but always have that 2D print available and make sure the patrons know which one they're paying for.

- Start the movie on time and keep out any latecomers. I don't think I'm the only one who despises the way theaters will say a movie starts at 7:30, then shows 20 minutes worth of ads and previews. I have grudgingly learned to accept that pre-show commercials and fluff programs like "The 20" are necessary evils, but I don't wanna see them once the time on my ticket is reached. Also, people are always gonna arrive late. I get this. Let the trailers serve as a kind of grace period for latecomers to straggle in, but once the lights go down, that should be it. Let the ushers close the doors after the opening credits (if there are any) and keep out all latecomers. Offer them a full refund on their tickets, offer them a gift certificate for their next visit, but keep them out.

I think implementing these ideas will go a longer way than installing a wine bar. If you've got similar ones, fire away.
Posted by Rich at 10:00 AM