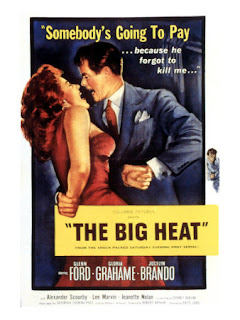 The Big Heat was a terrific movie, but I couldn't help thinking about all the familiar cop movie cliches that have become so familiar to modern audiences, in particular: "They killed his wife/girlfriend/son/parakeet - now he's out for revenge!" We laugh because they've become so familiar and have been parodied so often, but they had to have come from somewhere. I recognized this trope, yet it still had an air of freshness while seeing it here. Part of it had to do with the violence, which you just don't expect from an old movie, not even a classic noir like this, and yet it's there (this must have been the movie where Lee Marvin's on-screen persona was born).

Part of it was also Glenn Ford's slow-burn performance - Glenn Ford, who always struck me as one of cinema's nice guys. Here he's knocking out fools and choking women and acting as tough as any Bogart character, yet he still has that veneer of decency and compassion to him. His rage is simmering just below the surface, yet it never quite erupts the way it might in someone like Marlon Brando or Jimmy Cagney; it spills out slowly, measuredly, but is no less dangerous for it, and in a way, that's almost more unsettling, coming as it does from a good man pushed too far (another cliche).

Don't have too much more to say about this film. It was on my schedule for weeks but I kept pushing it back because other films had taken priority, so I'm glad it's behind me now.
Posted by Rich at 10:06 AM