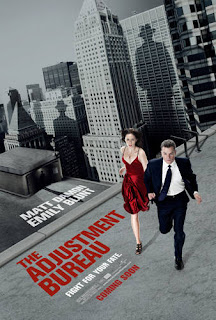 The concept of free will is something that's interested me ever since I first read the great epics The Iliad and The Odyssey in college, and learned about the ancient Greek gods. It would always frustrate me that the humans in the story never seemed to care that their lives were being manipulated by the gods, often very explicitly and unsubtly. I know that they had a different attitude on the matter than modern man, but still, I can't understand how anyone could go through life knowing that they're little more than puppets on strings.

A few years ago, I wrote a short story in which the protagonist, armed with knowledge of future events, is in a position to change the timeline for the better, but at every turn he is cautioned against tampering with humanity's ability to decide their future for themselves. In the end, he does alter the timeline, but I deliberately left the consequences of his act vague, and I emphasized the fact that things could still end up the same as before. What the new future would become was not as important as the fact that it was literally unwritten.

The Adjustment Bureau plays with the same 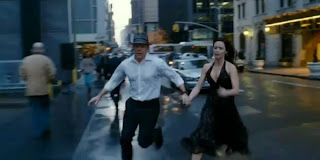 concept, imagining a cosmic corporation that charts the course of humanity. As with my short story (which is absolutely nothing like this movie), the protagonist who attempts to alter fate does so out of love, though in my case it was the love of a son for his mother. It has been argued that this movie is an allegory for religion, which reminds me of those Christian bumper stickers that say "Relax, God's in charge." This, in turn, goes back to the question of how people can live their lives knowing their fate is not in their own hands.

In one sense, I suppose it's easier. Believing that one's future is in the hands of a higher authority means one doesn't have to do much. It requires a great amount of faith, but if one can manage it, then it seems to me the rest doesn't matter. That always struck me as the problem with religion - that faith in a higher authority can be used to justify anything. One of the characters in Bureau realizes this, which is likely why he chooses to do what he does in the second half of the story (trying to avoid spoilers here). It's the same reason why I can't wrap my head around astrology, and I have had epic arguments with people about that.

After I saw Bureau, I went back home and re-read my story. I wrote it for a cartoonist friend on the occasion of the birth of her child, and there are indirect references to her work woven throughout the story. I've often wanted to re-write it as a more generalized story, without those Easter eggs, but I just can't do it. It wouldn't be the same.

There was this trio of old people about 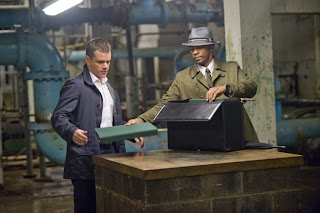 five or six rows behind me when I saw Bureau, and in the beginning they felt the need to remark at every little odd thing that happens. You'd think they never saw a sci-fi movie before - who knows, maybe they haven't! I was on the verge of moving to the other side of the auditorium, but once the movie settled in, so did they, and I didn't hear from them until the end. Afterwards, I heard them note Anthony Mackie's name in the closing credits, and I heard one of them say something like, "Oh yeah, that's the guy from The Hurt Locker." I was impressed that not only had they seen The Hurt Locker, but that they remembered who Mackey was (he's not exactly a household name), so I forgave them for their earlier yapping.

So how do you feel about the concept of free will versus predestination? Like I said, this is a topic that interests me and I always like to hear from others about it.
Posted by Rich at 9:40 AM