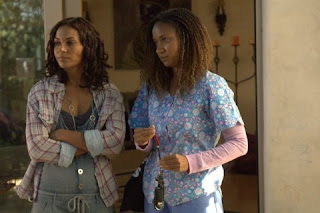 ...Mainstream, black themed films have all but disappeared in recent years. And as independent film in general continues to maintain its precarious toehold in the pecking order, African-American independent film, aside from the black film festival circuit, is barely on the radar, and distribution remains a challenge—to say the least. Enter AFFRM, the brainchild of DuVernay and organizers of some of the black film festivals. Their goal is simple: to eventually release two films a year; quality independent movies from black filmmakers and aimed at black audiences that would otherwise languish in distribution limbo.

I had mentioned AFFRM here before, but now that the group is ready to release I Will Follow in six national markets, including here in New York, it's time to revisit this story. AFFRM has been gathering quite a bit of press in the past couple of months. They had a presence at Sundance, and since then they've gotten write-ups and mentions in The Root and the Philadelphia Sun, among other places. As for the movie, well, you can't ask for a better endorsement than one from Roger Ebert himself.

AFFRM comes at an appropriate time. With black actors finding it harder to maintain a presence in mainstream films, black films in general will become harder to find, so there's a lot riding on the success of this program. Not just new voices are needed in black film, but different ones; different viewpoints, filmmaking styles, genres, etc. AFFRM could be an outlet for that.

The host festival in New York is the Urbanworld Film Festival, and I Will Follow will play at the AMC 34th Street in Manhattan. It'll also play at these locations around the country. My review of the film will go up next Monday (and yeah, it'll be an actual review instead of the usual kind of tangential posts I write).
Posted by Rich at 9:24 AM