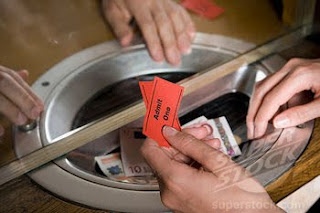 ...film attendance in 2010 endured its largest drop since 2005. The declines in moviegoing, apparently, won't be reversed by a surge in quality.

On Twitter, the suggestions have been flying for some time on what, in fact, will reverse it: more in-theater amenities, more 3-D releases, fewer 3-D releases, across-the-board price reductions (unlikely to happen), assorted other recommendations. But the sales slump also calls to mind another idea that has been alternately floated and dismissed over the years: variable pricing. A jargony term for a straightforward concept, variable pricing basically means that ticket prices will rise or falling depending on a slew of factors, most notably how much people want those tickets in the first place.

This is an interesting idea worth talking about further. I'm fortunate in that I live in an area where, if I don't want to pay $12 at one theater for a movie, I can go elsewhere and find that same movie for a cheaper price. Maybe it means I have to go at a certain time of day. Maybe it means I have to wait several weeks before it reaches that theater. But I have that luxury. When I lived in Columbus, I made sure to familiarize myself with the theaters there and find where and when the best times were to see a first-run movie. I even took advantage of advance screening passes given out by the local alternative weeklies. As I've said before, one doesn't have to pay full price for a movie if one really doesn't want to, but by the same token, it's easier to do this in some places than in many others.

Now if somebody were to come along and offer variable pricing, I think this could be a good idea in that it would make people think about the choices they make at the box office. There'll be complaining, naturally, but once people realize that the system will benefit those who order early, I think it could work out over time. Besides, people who unequivocally want to see Transformers or Harry Potter or Captain America, especially on opening weekend, will see it regardless of price, I believe.

My concern is how this would effect the non-chain, local theaters. Would they be able to compete? I suspect it'll once again come down to survival of the fittest. Many local theaters offer matinees and other similar discount deals, but do they offer modern amenities like stadium seating, digital projection and sound, and all that kinda stuff? (Keep in mind that I'm not talking about the art houses; they cater to a whole different audience.)

I'd like to see variable pricing experimented with in some form, just to see how people take to it. I'm not saying it'll work, but it may end up making for smarter moviegoers.