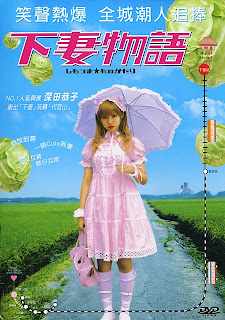 The first time I saw The Matrix - a movie I had to be dragged to, by the way, because I had no interest at first - one of my first impressions, besides "OMG what a friggin' AWESOME MOVIE" was that it was like watching a live-action anime. Many of the tropes commonly associated with Japanese sci-fi cartoons - leaping hundreds of feet in the air, impossible acrobatic moves, complex and fast-moving fight scenes shot from unusual angles - were on display here. In high school, I was into anime (so I knew, then as now, that it's more than just sci-fi), and through the subsequent years I saw how Asian culture in general permeated Western society, especially with the rise of manga comics. Still, seeing an American action film that so much resembled the anime cartoons I'd watched with my friends as a teenager was breathtaking, to say the least. Eventually I'd see a few Japanese live-action imports that resembled anime to an even greater degree than The Matrix.

Japanese pop culture is unlike anything in the West. I'm sure you've seen examples: the manga comics of Rumiko Takahashi, the music of Shonen Knife, the anime films of Satoshi Kon, the live-action films of Takashi Miike; the list goes on. I am not qualified to speak authoritatively on the subject, but I will say that much of the cross-pollination between East and West seems to come through the younger generation. Walk into the manga section of any Barnes & Noble, for example, and you'll see nothing but kids sprawled out on the floor reading for hours at a time. While I certainly like some of this stuff myself - how can anyone not dig the anime of Hayao Miyazaki or the music of Puffy AmiYumi? - I know I feel old sometimes looking at the way kids embrace all this pop detritus from across the Pacific...

...which brings us to the film Kamikaze Girls. This 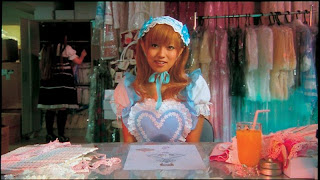 was the movie that the young ladies of the podcast Some Cast It Hot raved about when I listened to their show. It's basically about the friendship between two teenage girls, one a girly-girl outcast who digs 18th Century European Rococo art and fashion; the other a tomboy biker chick; both united by a jones for embroidery. The film is shot with vibrant candy colors and has an anything-goes aesthetic: breaking the fourth wall, cartoonish special effects, literal cartoon sequences, broad characterizations, the works. Anyone who saw Scott Pilgrim vs. The World will know what I'm talking about. It's the kind of thing that Japanese audiences probably wouldn't find unusual at all.

Still, it's not totally outside the Western experience. As I watched it, I thought that if John Hughes were Japanese, this might be the kind of film he'd make. Momoko, the protagonist, is at times suggestive of the heroines of Sixteen Candles and Pretty in Pink, in terms of how she relates to the world around her. The difference is that she has less angst. Her friendship with Ichiko starts off kinda weird, but evolves into something genuine over the course of the story.

The second half of the movie kinda lost me, though, with all this stuff about Ichiko and her bike gang and some person who may or may not exist that they're looking for. Ultimately I have to conclude that while it has its moments, it's not for me, though I can see how young women on both sides of the Pacific would go for it. Maybe it's a gender thing.
Posted by Rich at 9:31 AM