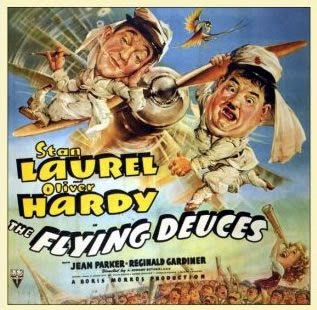 I am ashamed to admit that prior to last night, I had never seen a Laurel & Hardy movie before. Can't say why. I mean, I knew who they were, but I dunno, I just never took an opportunity to see any of their films before. Now I have, though. I realize The Flying Deuces is one of their much later works, and doesn't represent L&H at their prime, but for what it was, I thought it was pleasant enough. I definitely LOL'd at a few moments, and I think this represents L&H as well as anything else I could've picked.

What struck me about L&H, practically from the beginning of the film, is how they must have been the inspiration for the Ralph Kramden and Ed Norton characters from The Honeymooners. I've always been a big fan of that old TV show. I'd always watch the marathon sessions on local TV whenever they aired back in the day, and I had never, ever made the connection between Ralph & Ed and L&H until now.

Another surprise to me was that Hardy, the fat one, was also the smarter of the two. Since he's billed second, I had automatically figured he played second fiddle to Laurel. Plus, I probably made an association with that other classic fat guy-skinny guy combo, Abbott & Costello, where Costello, the fat guy, is the dim one. 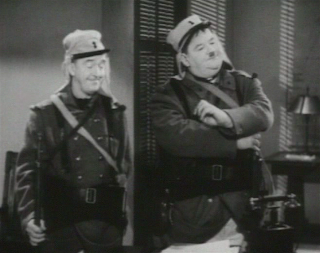 archetypal versions of themselves in Deuces (they're referred to by their real names). Hardy - or at least his on-screen avatar - strikes me as a blue-collar type striving to be a proper gentleman, while Laurel comes across as a down-and-out upper-class type who never fit into high society. I think Laurel is even supposed to be British, although his accent is nowhere near as strong as the antagonist in this story.

There's a genteel manner to their friendship, and almost, dare I say it, an innocence as well. They stick together because they don't have anyone else, and the cliche is true: they do bicker like an old married couple. In these modern, sexually explicit times, it's become far too tempting to look for examples of Ho Yay in older works like this, but that's because it's also become far too easy. For example, in the scene where Hardy is about to kill himself by sinking into the Seine River, he insists on taking Laurel with him because, he says, Laurel would be nothing without him. Even though Hardy's misery is his alone and not Laurel's, he still won't commit himself to the hereafter without his heterosexual life mate.

Deuces has some material that in any other movie might be pretty grim. Hardy wants to die because the girl he loves loves someone else. L&H talk about death and dying, and whether or not they'll come back in another form. And as for the ending, well, I watched it thinking, "They're not really gonna go there, are they?" and... they do go there. But it should be emphasized that all of this is played for laughs. I doubt all their films have such black humor, though.

L&H started out as silent film stars, and I thin 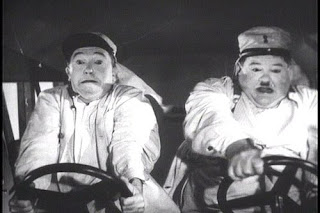 k this movie could have worked as a silent, with title cards of course. Once they decide to join the Foreign Legion, much of the humor is physical, including chase scenes and slapstick. There are some out-of-nowhere musical interludes, though, including a song by Hardy.

L&H didn't have the verbal perspicacity of the Marx Brothers (who we'll talk about on Thursday), or the propensity for physical violence as the Three Stooges. In all honesty, they come across to me as fairly vanilla by comparison, and maybe that's why I never bothered with them until now. Still, for what they are, they're alright. I can't complain. And it's a real revelation to see how they must have inspired Jackie Gleason and Art Carney years later.
Posted by Rich at 9:15 AM