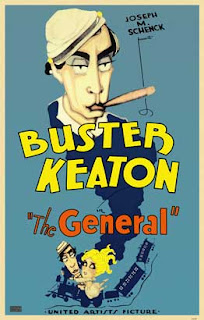 While I was watching Buster Keaton's The General, I thought perhaps I had make a mistake in choosing this one. I'm fairly certain that I've seen one or two Keaton films before, and I knew he was regarded as a cinematic funnyman, but this is more like an action film than a straight-up comedy. Regardless, even if it's not as riotously funny as I thought it would be, it's still a pretty awesome movie.

It's hard to believe that he did his own stunts. There is a comedic element to the situations he gets himself in, coming from, I suspect, the fact that he's not some muscle-bound action hero; he's just a regular-looking little guy in way over his head. He looks beleaguered at every turn, and you get the sense that he has no real plan in his attempt to save his train and his girlfriend, that he's making everything up as he goes along, which can come across as funny (even if I didn't laugh that much). And yet he comes out a hero in the end. As co-director, Keaton must have had a hell of a time choreographing the action sequences.

It probably goes without saying that Keaton must 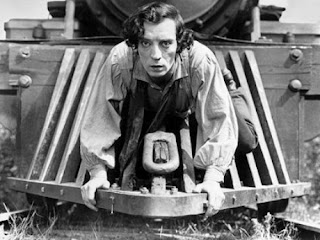 have had a remarkable stamina to do as much running, jumping, and leaping as he does here. And again, it should be emphasized that if he were alive today and you saw him walking down the street and didn't know who he was, you wouldn't give him a second glance. We hear quite a bit these days about actors who get into incredible physical shape to do action movies, and perhaps we get to see them flex their muscles doing whatever they need to do. There's a certain glamor to it all, a sexiness that's as much part of the movie as anything else. The General doesn't make Keaton look sexy or glamorous, but then again, filmmaking was quite different back in the day.

The movie is set during the Civil War, but it's no Gone With the Wind. It's more like a "Civil War For Dummies" version. I admit, it did kinda bug me a little bit to see that Keaton's character was on the Confederate side and not the Union, but it does not matter at all because the movie is so entertaining. The version on YouTube has a terrific jazzy score to it as well.

Previously on Make 'em Laugh Week:
The Flying Deuces
Posted by Rich at 11:25 AM