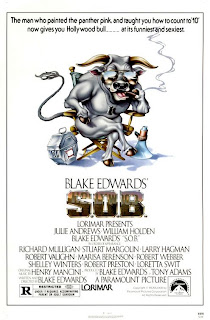 Ever since Blake Edwards died late last year, I'd been meaning to take a closer look at his filmography. First of all, I'll admit to having a deliberate blind spot for Breakfast at Tiffany's. As much as I would like to be able to enjoy that movie on its own merits, I can't get past Mickey Rooney's character and I doubt I ever will. Whatever. I don't feel like I'm missing a great deal.

I haven't seen all of the Pink Panther movies, but I've seen enough to know and like them. You can't go wrong with Peter Sellers, and that also includes The Party (my friend Steve, who I used to work video retail with, loves that movie). The Days of Wine and Roses is mighty tough to watch, but it's one of Jack Lemmon's best performances. My father loved this movie too.

I vaguely remember as a kid seeing TV ads for 10 and Victor/Victoria and thinking that they must be really raunchy. I was, of course, way too young to see these movies and my parents would've never taken me to them, so all I could do was wonder. I certainly recall how popular 10 was, and how big a pop culture sensation it was. I had a general impression of what it meant to be a "10," but again, I associated it with the adult world and thus it was far beyond my reach. And I certainly couldn't make heads or tails of the gender-bending of Victor/Victoria. One day I'll have to watch both of these movies and see how they match up with my childhood impressions.

S.O.B., according to what I've read, is semi-autobiographical, inspired by the commercial failure of Edwards' film Darling Lili. We see lots of big-budget films flop at the box office, but we rarely see how they affect the filmmakers. Watching this, I was reminded of the recent travails of one of my favorite contemporary directors, Kevin Smith. While few of his films have been huge successes, they've been profitable enough for him to have a devoted following, and while he's never been a stranger to controversy with his films, he continued to persevere.

In 2010, Smith released Cop Out, a big-budget action-comedy, one he didn't write, and one fraught with tension between him and star Bruce Willis. It bombed spectacularly, and Smith lashed out at the critics as a result. Now, he's taken an entirely different approach with his forthcoming film Red State. Like Edwards' stand-in character Felix Farmer in S.O.B., Smith bought his own film, in part as an act of defiance against the studio system which he felt failed him. Smith will self-distribute Red State, on the strength of a recently-concluded roadshow which earned his film's budget back. An unusual set of circumstances, but one precipitated - like the events in S.O.B. - by a box office bomb.

It takes resiliency to not only rebound from a public misfire, but to have it inspire one's future work, and I give Edwards credit for that. While I thought S.O.B. ran a little too long, it was funny, and seeing Julie Andrews topless certainly didn't hurt either!
Posted by Rich at 9:40 AM