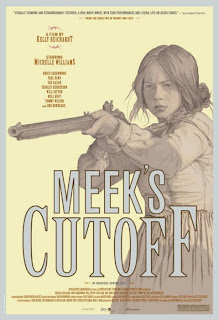 Meek's Cutoff invites some comparisons to True Grit (either one): old, scruffy, morally-questionable dude undertakes a mission of great importance on behalf of (and in the company of) tough frontier woman, one that takes them through the untamed wilderness of the old West. My main interest in this movie was Michelle Williams, whom I love, but I was also impressed with Bruce Greenwood. As long as we're making comparisons with True Grit, I thought Jeff Bridges' performance was a little overpraised. Rooster Cogburn is supposed to be somewhat loutish and even disreputable, but I thought he pushed it too far in that direction for most (but not all) of the movie. Here, Greenwood's Stephen Meek feels less like a parody and more like a proper badass anti-hero. I loved the constant tension between him and Williams; it served as a reminder that she and the rest of the wagon train were putting their trust in this man who may not be entirely reliable. Also, you can actually understand what he says!

I was pleasantly surprised to see that this was an original screenplay, though not by director Kelly Reichardt (whom I'd like to see more of, after this and Wendy and Lucy). She had a great eye for detail, not only with the period costumes and props, but with getting the cast to do the little everyday things that the people in a wagon train would have to do to survive and actually showing them. There's one scene that lingers on Williams loading a shotgun and firing it, and you see the process of filling it with powder, stuffing it down the barrel, locking and loading it, taking aim and firing. Meek, like many recent Westerns, de-glamorizes the genre to a great extent. Reichardt didn't even shoot it in widescreen; the very opposite, in fact. The frame is very small, restricting those sweeping, panoramic vistas we've come to expect from Westerns and providing a much different feel. 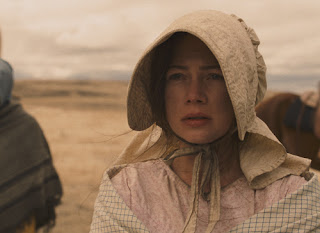 Quiet movies like this, with a very minimal score and lots of ambient sound, really test the audience you see it with. You trust them to be as quiet and attentive as they can and you hope they don't blow it (things like the occasional cough or sneeze are acceptable, of course). This opening weekend crowd was fine, although the woman next to me simply had to check her smart phone twice. She didn't talk on it, just fiddled with the screen for a minute or so before putting it away again. A third time and I would've told her to put it away, but fortunately there was no third time.

A few words about the Film Forum: I like the place a lot, but I hate the huge pillars in the auditoriums. You have to be careful where you sit, because in some places the pillars obstruct the screen. The backs of the seats all have small plaques dedicated to a financial donor, I would imagine, since the Forum is a non-profit cinema. I always wonder whether a certain donor would want to sit in his or her "seat" whenever they come down there for a film. Before the movie began, they played a bunch of Western-type music, which I thought was a great touch. There was some Morricone-sounding spaghetti Western score, "Don't Fence Me In," "Ghost Riders in the Sky," some other Western scores, stuff like that. And in the lobby they had a couple of mannequins with costumes from the film.

The Forum's popcorn has a great reputation, but I thought I'd try something different to eat: I had a slice of chocolate orange bundt cake. It wasn't bad; it was thick and sumptuous, and lasted quite awhile for a relatively small slice. Actually, I'm just now reminded of the last time I went to visit my pals Bibi and Eric and Bibi tried to make a chocolate orange bundt cake. She fussed over it for a long while, and while the result was alright, I liked the Forum's version better.
Posted by Rich at 9:46 AM