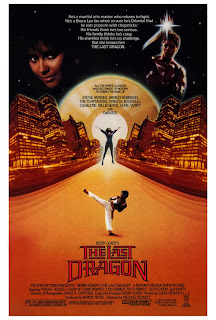 It's Everybody Was Kung-Fu Fighting Week! All this week we'll look at some notable martial arts films, from the ridiculous to the sublime.

I vaguely remember seeing The Last Dragon as a kid and I don't think I was all that impressed with it then either. Still, at least it has some camp value. It's produced by Motown impresario Berry Gordy, so the whole thing looks like one big music video, but I wouldn't call it a musical despite the many cheap excuses to insert songs throughout the film. It's also a love letter to Bruce Lee (who we'll look at later this week) to the point where he probably should've gotten credit as a cast member. This movie screams 80s: arcades, day-glo colors, breaking and popping, synth-heavy music - it's embarrassing and yet amusing at the same time.

I knew I wanted to watch one black martial arts movie, and I almost went with Jim Kelly in Black Belt Jones. When I saw this, though, I guess it was my not-even-half-formed memories of it that made me want to see if it was anywhere near as good as I remembered (and like I said, I didn't remember it being all that good anyway). What can I say? I'm a child of the 80s. And besides, I didn't want everything I watched this week to be serious.

Dragon actually reminded me of a completely different movie - Breakin'. They're both very 80s-glitzy, sanitized, Hollywood-friendly versions of sub-genres that have grittier roots. Actually, Dragon has a bit more profanity than I remembered, but between all the little kids who get involved in the big fight at the end, and Taimak's character's virginal innocence and his chaste "romance" with Vanity, it seems as if the filmmakers were trying to appeal to a wide audience.

If Sam Jackson really wants to remake this, as has been reported, he can only improve on it, though I kinda like the idea of having a bad guy dressed like a Klingon in a traveling Star Trek roadshow - again, for purely camp value. But do we really want a grim 'n' gritty, gangster rap, Dark Knight version, like we'd probably end up with? I don't know.

I don't have too much more to say about this, though at some point down the line perhaps I will watch Black Belt Jones after all. Oh! Almost forgot - I was shocked to see a young(er) William H. Macy in a single scene early in the film. That alone made this entire movie worth re-watching!

Previously in Kung-Fu Week:
Drunken Master
Posted by Rich at 10:04 AM