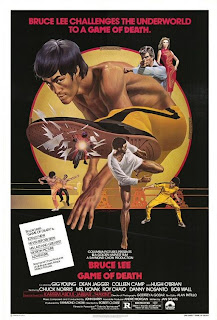 It's Everybody Was Kung-Fu Fighting Week! All this week we'll look at some notable martial arts films, from the ridiculous to the sublime.
Game of Death
seen online via YouTube
4.21.11

1. Young Bruce was a street fighter while growing up in Hong Kong. Gang violence was everywhere, and he was getting quickly caught up in it by the time his father decided Bruce needed to learn martial arts.

2. He taught martial arts in Seattle, opening his own school where he taught his version of the Wing Chun style, which he first learned at the age of 13.

3. The Green Hornet was called "The Kato Show" in Hong Kong because of Lee's immense popularity there. Lee was a child star in a number of short black-and-white films thanks to his opera star father.

4. Lee is believed to have been an atheist. He was influenced by Eastern religions, including Taoism and Buddhism, and read many books on martial arts and fighting philosophy, but he is quoted as having said, "All types of knowledge ultimately leads to self-knowledge."

5. Game of Death was originally conceived in 1972, but production on it stopped when Warner Brothers offered Lee Enter the Dragon. After Lee's death in 1973, the film was completed with stunt doubles and released in 1978, but only fifteen minutes of the real Lee was used.

I did not know that this was Lee's last film, nor did I know that it had so little of him in it. If I did, I would've watched a different movie of his. Still, it certainly has its moments - a fight with Chuck Norris in the beginning, a fight with Kareem Abdul-Jabbar towards the end (the main appeal for me). I knew something was up with this movie by the many ways in which Lee's character's face was either obscured or disguised. For a moment, I thought I was watching Dark Passage again! I noted the Bond-like opening credits and John Barry music; turns out George Lazenby was going to be in the original version. The final sequence, where Lee ascends a pagoda and fights a different guardian at each level, struck me as being a lot like a video game, though I doubt that this was meant to be the "game" implied in the title.

I think I'll hold off talking further about Lee for now, since we don't really get to see him in all his glory in this movie. Perhaps I'll watch a different Lee movie later on.