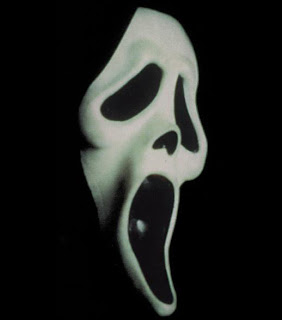 
From the first time I saw the trailer I knew Scream was different from most horror movies. I’m not a big horror movie fan, though there are plenty of them that I like, but I knew enough about the clichés of the genre, especially the slasher flicks, to recognize their subversion in Scream.

The meta-textual elements get lots of discussion, of course, but in re-watching the original, I had forgotten that it’s genuinely scary too. The opening scene with Drew Barrymore sets the stage perfectly. I was grinning at first, speaking familiar lines along with the movie, but by the time she gets whacked I wasn’t grinning. This scene is still as creepy and disturbing as anything Wes Craven has done before or since.

The march of technology in the Scream movies is notable. In the first one, “Ghostface” calls Barrymore on a (cordless) land line telephone, and cellphones are still regarded as new technology. When the police chief questions Billy, he asks why he has a cell at all, as if it was unusual for teenagers to have them! Billy, of course, being a modern American teenager, answers, “Everybody’s got them.”

Personally, I remember seeing Mulder and Scully use them on The X-Files and thinking, well, they’re government agents, of course they need them. So this scene in Scream rings true with my memories of cellphones at this point in time. They weren't quite as ubiquitous as they are today, but they were getting close. And of course, the obscene phone caller-as-killer idea goes at least as far back as films like Black Christmas, which I’m sure Craven was well aware of. 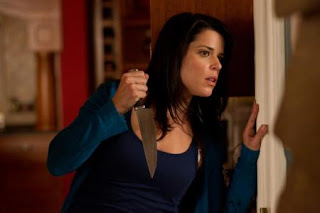 I had forgotten how affluent Woodsboro is. In re-watching Scream, I was a bit shocked at the lavishness of all the homes, something I had never paid attention to in all the times I had watched this film before. I suppose that’s a part of the slasher horror genre too – the notion, never overtly expressed, but there below the surface, that not even the suburbs are safe from deadly violence. The suburbs, for many years, was the source of white flight from the inner city, and sure enough, the Woodsboro residents are almost exclusively white. Now that urban sprawl has proven to be an unsustainable form of growth, we’re seeing many people returning to the cities. Scream 4 doesn't reflect this change in society, but I didn't really think it would.

Scream 2 was entertaining but I didn’t feel like the stakes were sufficiently raised. The motive was simple revenge, as there’s a connection to someone in Scream, but we never got to see that connection; indeed, this connection is only fleetingly mentioned in the first movie, so the revelation kinda feels like an ass-pull, like “Where did that come from?”

I liked the development of Cotton Weary, even if he did come across as an obvious red herring. Specifically, I liked how he felt he was owed a shot at stardom, even if he was falsely accused of murder by Sidney. His obsession with fame reflects a common, and disturbing, trend in society of killers – or anyone who misbehaves in public – becoming media stars. As we’re currently seeing with Charlie Sheen, the media, and by extension the public, are more than willing to reward bad behavior. One can hardly blame Cotton for wanting his fifteen minutes. 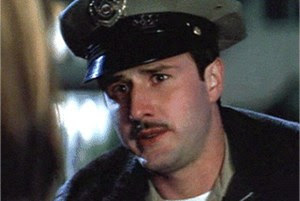 Scream 3 is where the franchise really falls apart. The revelation of the killer and that person's relationship to Sidney comes completely out of left field, which is bad enough, but I also wasn't interested in the cannon fodder supporting characters. Their deaths meant nothing to me. Plus, this one is by far the silliest. I mean, Jay and Silent Bob? Really?

By this point three primary characters have emerged - Sidney, Dewey and Gale - and it's become clearly apparent that no matter what they may go through, they'll survive no matter what, and this pattern continued in Scream 4. I have to wonder why, though, especially if 4 is meant to kick-start a new trilogy. We've seen these movies self-referentially explore the horror genre - and by extension, the movies in general - front to back and inside out by now. Isn't it time to shake things up story-wise?

In 4, I would've had Jill kill Sidney and get away with it. She was setting herself up as the sole survivor, the "final girl" in genre parlance, even though she was also the killer. Why not run with that idea for awhile? That would provide a much better rationale for a fifth movie: the killer as protagonist. We could see, for the first time in the series, how the killer sets up for a kill (which would justify the Peeping Tom reference in 4). And she would play the innocent the whole time, with Dewey being the only one who suspects otherwise. That would've given the series the kick in the pants it needs - a kick that I doubt will come now.

I remember seeing the second movie with Jenny at a theater that's no longer around: the predecessor to the IFC Center in the West Village (whatever its name was). I don't recall how much she liked it. Jenny loves horror movies, but her tastes run more towards cult stuff. Although I do recall watching Children of the Corn at her house one time and both of us laughing at how silly it was. 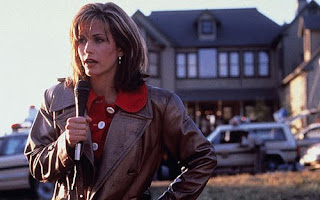 I've written about the Jackson before. It seems they've got new management now, although I wonder if it's affected attendance any. The early evening showing I went to didn't even have a dozen people. I got there ten minutes before showtime, but the movie from the previous showtime was still screening. I looked through the window of the doorway to the auditorium and, regrettably, caught a glimpse of Jill holding a knife, clearly addressing Sidney. So while the ending was kind of spoiled for me, at least I didn't know the context of what I fleetingly saw.

I had to wait in the lobby for another 10-15 minutes. At one point some guy who must have been the manager looks at me - the only person in the lobby other than the girl behind the counter popping popcorn - and asks if I need any help. I told him my situation and he said, "Just a few more minutes." I can't recall if this has ever happened to me before. I was tempted to sneak into the adjacent auditorium for a few minutes, where Rio was showing, but I changed my mind. Thankfully, the previous show declined to roll the closing credits so the next show could start sooner - but they had to throw in a couple of ads first, of course.

The Jackson has hung on for a long time. I fear its best days may be behind it now, but I hope I'm wrong.
Posted by Rich at 10:22 AM