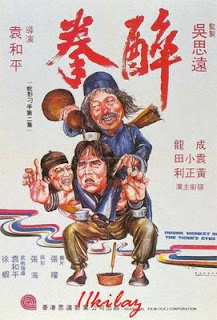 It's Everybody Was Kung-Fu Fighting Week! All this week we'll look at some notable martial arts films, from the ridiculous to the sublime.

Bibi and Eric actually have a cat named Jackie Chan. It's one of three cats they own - they're huge cat lovers. One of the cats (I'm not sure if it's JC or not) loves to bat away balls of paper whenever you throw one at him, and he can do this fifteen, twenty times in a row. It amuses Bibi and Eric to no end.

One of the many awesome things about old Asian kung fu movies is that everybody knows kung fu in them. You can be some old woman who only appears for a couple of scenes, or a funny-looking comedy relief character, or even a fat dude, it doesn't matter - everybody in a kung fu movie knows kung fu and has the potential to kick your ass if you're not careful. It's hilarious and amazing at the same time.

I was never that much into them, but sometimes I'd watch one if it was on TV on a Saturday afternoon, back when local TV stations still played Saturday afternoon movies. I talked recently about dubbing versus subtitles in foreign movies and I briefly mentioned martial arts movies as an argument against dubbing in general. However, here in America, an entire generation grew up with dubbing in these films (not to mention Asian monster movies), and for us, it's part of their charm. In recent years, younger generations who have become more familiar with Asian culture thanks to anime and horror films have come to demand a higher standard - for instance, I watched Kamikaze Girls subtitled, not dubbed - but for me, and others like me I suspect, watching an old martial arts film subtitled seems wrong somehow.

That's why I was so happy to watch the Jackie Chan classic Drunken Master dubbed. I'd seen one or two of Chan's Asian films before, so I had an idea of what to expect with this. I still remember when he was being touted as The Next Big Thing in the 90s. I wasn't that impressed with his first starring role in an American film, Rumble in the Bronx, but I did like him - and in watching Drunken Master last night, I remembered why.

Chan is as serious a martial arts master as Bruce Lee, Michelle Yeoh, Jet Li, or any of them, but the comedic element he brings to his fighting style is breathtaking in its elaborateness. I love the way he'll take an object, any object, and balance it, play with it, or use it as a weapon or a shield in the middle of a fight. And his fights take on a level of slapstick that rivals the Three Stooges. While this was a fun movie, I thought it was a little too cartoonish at times. I prefer the humor when it comes from the characters and their personalities, like the early scene when Chan is trying to get a girl to kiss him, and not when it's punctuated with silly sound effects.

The term "over the top" doesn't seem to exist within the Chan oeuvre, but for the most part, that's okay if it means fights like the ones in this movie, of which there are many. That's another great thing about old kung fu movies - they never, ever forget what it is the people pay to see! Plus, it's such a nice change to see a fight filmed in such a way that you can actually follow what's going on, without a bunch of extraneous cuts or peculiar camera angles.

So where would you rank Chan amongst the all-time martial arts movie stars? I'm inclined to put him at number two, right below Bruce, despite the many crappy Hollywood movies he's made.
Posted by Rich at 9:24 AM