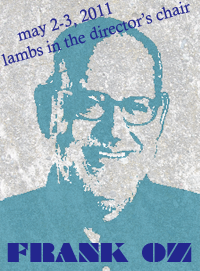 LAMBs in the Director's Chair is an ongoing event in which LAMB bloggers discuss the work and career of a given director. The current subject is Frank Oz. The complete list of posts for this event will go up May 2-3 at the LAMB site.

I almost wish I hadn't re-watched The Dark Crystal. It had been years since I had seen this movie, and initially I was excited about seeing it again because I fondly remember how much I loved it as a kid. What kid wouldn't love it? A magical alien world, an epic quest, a wide variety of beings, both good and evil, and all created through the muppet magic of Jim Henson and Frank Oz? You can't ask for much more than that. I was already a huge muppet fan; every weeknight I'd faithfully watch The Muppet Show on television, and in my mind, they were (and still are) as real as my closest friends. So a movie like this was tailor-made for me.

Now that I'm grown-up, though, I can't look at Crystal the same way anymore. Watching it last night, I found I couldn't ignore the nagging, unanswered questions: what was the Crystal's original purpose? How did the shard get lost in the first place (and how did it end up in Aughra's possession)? Who wrote the prophecy of a gelfling being the one to restore the Crystal? And why a gelfling anyway? Why didn't the Mystics do anything to stop the Skeksis wiping out all the gelflings? And on and on.

I know, I know, I'm not supposed to wonder about stuff like that, but I can't help it. It's easy to think that anything is possible in a fantasy setting, and I suppose that's true, but in movies like this, sometimes it feels like the plot dictates what the characters can and can't do. The audience needs an exposition dump? Have Jen and Kira read each other's minds when they first touch! Jen and Kira are trapped on a ledge with nowhere to go? It's okay - Kira can grow wings! I don't wanna sound like I'm dumping on this movie, though. It's visually spectacular and genuinely fun to watch once you get caught up in it all.

When it comes to muppets, I've always been a little leery of 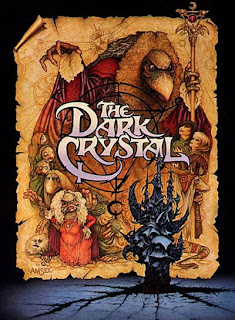 wanting to know too much about their creation, because like I said, characters like Kermit and Fozzie and Miss Piggy are real to me and always have been. Still, I've always recognized the work Henson, Oz, and others have put into them. As I watched Crystal, I thought of Avatar for a moment and wondered whether a CGI fantasy land is that much superior to one created out of latex and plastic. It seems to me that the latter can compete very well with the former. Perhaps modern audiences have perhaps lost their taste for it? That would be unfortunate if it were true.

So I have to say something about Oz as a director, but I can't think of too much to say. Besides Crystal (which he co-directed with Henson), I've seen The Muppets Take Manhattan, Little Shop of Horrors (1986), What About Bob?, In and Out, and Bowfinger, and while he's obviously great at mixing real actors with muppetry, his non-muppet movies are kinda meh. They're okay (Bowfinger in particular was better than I expected), but none of them are the kind of movies I'd want to own so I could watch them again and again. Still, it's good that Oz was able to spin out a directing career of his own.