Can a woman be sexy and "empowered" too? 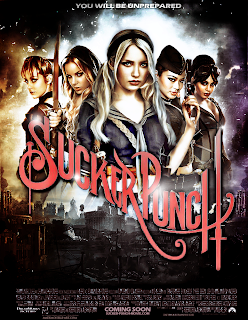 “For me, one of the main issues in terms of womens’ place in society and feminism is the sexual objectification of women... That’s something that feminists in the ’70s tried to fight against but has been totally lost in the 21st century consumer-celebrity world. So for me, when I look at the poster for Sucker Punch it seems actually incredibly sexist, because it is sexually objectifying women regardless of if they can shoot you or not.

“I have a kind of immediate, knee-jerk reaction to such iconography...I remember when the Spice Girls came out in the mid-’90s and it was all about girl power, but one of them was dressed as a baby doll, do you know what I mean? That isn’t girl power, that isn’t feminism. That’s marketing bullshit. And I find it very, very alarming.”

I swear I wasn't gonna get involved in all the talk about Sucker Punch and whether or not it succeeds in its attempt to make girl-power cool again. I haven't seen it; I have no intention of seeing it, but what I want to talk about goes beyond that one movie.

I believe women deserve equal rights in all things. Does that make me a feminist? I dunno. I believe feminism is way more complicated than that, so I can't say for sure. Still, Wright's statements did strike me as a bit odd. He goes on to say in the interview that his character, Hanna, is more empowering than the women in Sucker Punch because she doesn't dress like a slut. Now we know that different people find different things sexy. People's tastes go from Keira Knightley to Gabby Sidibe and everything in between; that's a given. However, for argument's sake, let's agree that the women in Sucker Punch are, in fact, sexy.

Without getting into Sucker Punch's quality as a movie, why does there have to be a disconnect between the way a female character acts and the way she looks? These are action movies we're talking about here, so they're fantasies to a certain degree anyway. Why shouldn't the women in them have the total package - brains and looks? More to the point, why should an "empowered" woman, however you define that, not only be denied her looks, but be judged on them alone?

I have no problem with studios using sex appeal to market female characters in an action movie. It's a proven incentive guaranteed to generate interest at the very least. Wright, however, seems to be saying that an "empowered" woman shouldn't also be sexy because that's just "marketing bullshit" - as if the two can't and mustn't coexist. I think you and I both can think of examples throughout film history that prove him wrong. (I don't wanna bring Hanna itself into the discussion because both the character and the actress, Saoirse Ronan, are underage.)

Like I said, I don't claim to be any kind of expert on feminism, but it seems to me that to reduce a conversation about female empowerment down to looks misses a great deal more to the subject.