'The Help' and black literature 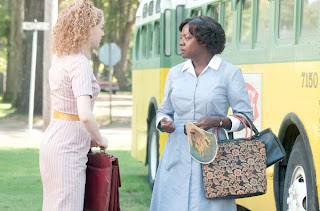 ...I confess I put the book down very early on because I couldn't get past a black maid carrying on about how much she loved the white children she was raising. (And, yes, novelist jealousy might have had a little something to do with it too.)

So the trailer for the upcoming film The Help, based on the hugely successful novel by Kathryn Stockett, has dropped, and I'm sitting here trying not to judge it. At this stage, my gut reaction is "Blind Side 2" - sympathetic Southern white woman helps uplift poor colored folk. I don't think people fully realize how surprising, and yes, game-changing, the success of The Blind Side was. It certainly helped make this movie possible. I don't wanna get into that aspect of The Help, though, at least not now.

I wanna address the preceding quote, because I believe there's a lot of truth in it. It comes from author Carleen Brice, a black woman, who runs a wonderful blog called White Readers Meet Black Authors, in which she tries to expand the potential readership for black books beyond other black people. Carleen's perspective on this is invaluable (full disclosure: I've written for her blog and she's a Facebook friend of mine). Her first novel, Orange Mint and Honey, was turned into a Lifetime movie called Sins of the Mother, starring singer Jill Scott. While this makes for an exceptional debut as a writer, especially a black writer, there are many more examples of books by black authors that struggle mightily for recognition.

So along comes this book by a non-black author, which is deeply rooted in the black experience, and it becomes a runaway smash hit which quickly gets scooped up by Hollywood and made into a major motion picture (and probable Oscar contender). I think it's a perfectly fair question to ask: if The Help had been written by a black author, would we see the same level of success?

I strongly suspect not. Look around Carleen's blog and I guarantee you'll find many black books that, while they may be critically acclaimed and have a strong fanbase, you won't find in your local Borders. And I'm not even talking about the ghetto-lit wave of books that has taken off in recent years (an entirely different subject in itself); I mean romances and dramas and sci-fi and mysteries and a whole diverse world of black lit that flies under the radar of most mainstream bookstores.

In the same post, Carleen has a review of The Help from another black author, Trisha R. Thomas, who liked the book. At this stage I think I'm gonna wait until after seeing the movie before I read it myself, because I also agree with Carleen in that reaching outside one's own experiences to write about others' is what makes for good literature.

I also want to follow Carleen's example and recommend some black books that anybody can read. There are two I discovered directly from her blog: Sugar, by Bernice McFadden, and Wench, by Dolen Perkins-Valdez, the latter of which is comparable to The Help. And an author I've long admired is the late great Bebe Moore Campbell. Try any of her books; you'll find much in them to treasure.
Posted by Rich at 5:42 PM