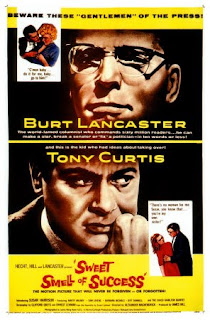 Somebody - I'm not sure who - wrote something about the late Tony Curtis recently that I never paid attention to before: that some of his biggest roles were ones that had an air of sexual ambiguity to them. Some Like It Hot, of course, falls into this category, and also Spartacus and a movie I've yet to see, Goodbye Charlie. I suppose I can see why. His good looks were not the chisled, "manly" type like those of a Cary Grant or Kirk Douglas. I guess that made it somewhat easier to buy him as a woman in Some Like It Hot (though not by much). He made some great movies. He'll be missed.

One part of what makes watching Sweet Smell of Success so enjoyable is all the location shots around Manhattan. As I looked at them, I tried to match what I saw here with the Manhattan I grew up with and am familiar with now, and the difference is unrecognizable, to say the least. While part of me grudgingly acknowledges that someone like me would have a difficult time walking as freely around Manhattan as I can now, another part of me wishes it were possible to see, firsthand, the city as it was then. Movies like this make the city look so glamorous, especially at night.

The storytelling in this film is so subtle. Every time I watch it, I catch little things I'd either never noticed before or didn't completely grasp. The scene where Sidney's pimping his cigarette girl friend Rita out to JJ's rival columnist in order for him to take Sidney's blind item is a good example. The things said as well as the things unsaid (to the audience and to each other), the attitudes of the characters, the way they relate to each other - I'd always known what was going on in this scene, but looking at it again last night, I appreciated the skill in which it's all put together.

My laptop recently got hit by a virus. I've got a new antivirus program now, but my Firefox program isn't working, which sucks because that's where all my bookmarked sites are. I'm using AOL, which I hate, until I can get Firefox fixed. Last night I couldn't remember my password for my YouTube account, where I had all ten videos for the movie in my queue. No big deal, but I compensated in a way by opening two windows at once and watched one part of the movie while loading the next part at the same time. You know how sometimes a video will stop in the middle because it's buffering or loading? By watching the movie this way, I got around that.
Posted by Rich at 9:02 AM