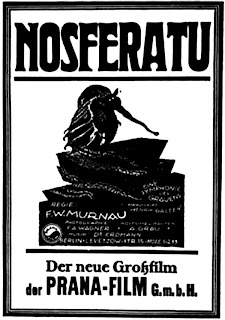 So Saturday morning I'm futzing around online when my high school buddy John instant messages me on Facebook for a chat. I ask him if he and his wife Sue would wanna come with me to Jersey City to see Nosferatu at the Loews Jersey. He'd never been there before, so naturally I sold him on the place - big gorgeous movie palace, playing old films all the time, extremely easy to get to from Manhattan. It worked.

The Loews is directly across the street from the PATH train, which connects New Jersey to New York. This being Saturday night, it was plenty crowded, which we expected. What we didn't expect was the car being so warm, which might not have been so bad if the weather wasn't as warm as well - we've been getting temperatures in the 50s and 60s for weeks.

Another surprise: a huge crowd for this movie! The line for Nosferatu wrapped around the side of the building and far down the adjacent alley. The only other time I'd seen a line that long at the Loews was for when Celeste Holm appeared at the All About Eve screening a few years ago. Once again, it was a diverse crowd, and I couldn't help but notice a few goth-looking kids amongst the patrons. I guess that should come as little surprise. 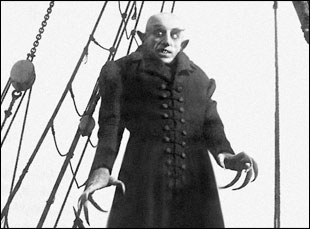 John and Sue seemed quite impressed with the Loews. Sue originally came to New York from Columbus, so she and I briefly compared the Loews to the Ohio Theater, another movie palace, which I'll write about in the future. We couldn't do much in the way of sightseeing because we wanted to get good seats as quickly as possible. Showtime was scheduled for 8:20, but it was delayed by about a half hour because so many more people were coming in. It wasn't a sellout by any means, but I suspect no one at the Loews was expecting such a large crowd. At any rate, the organist continued to enthusiastically play as the auditorium slowly filled up. I tried to get popcorn and sodas for us (small boxes, like the kind you get at a carnival, and 12-ounce cans, both reasonably priced) but they had to pop more popcorn while people were waiting on line, so I just got soda instead.

Nosferatu was the first silent film I had seen on such a large screen, not to mention with a live organist, and I can't begin to describe the difference seeing it this way makes. The music of the beautifully ornate organ fills you, gets in your bones. It helps you fill in the gaps left to imagination when watching a silent film, and when heard live, enhances the film-watching experience to a great degree. 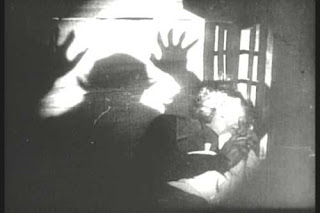 Modern movies, as good as many of them are, tend to leave little to the imagination most of the time. The host alluded to this point when introducing the film; how so many people, in an age of computer-generated effects and crystal-clear digital imagery, still choose to see an almost 80-year-old foreign silent movie, and I think that speaks not only to the power of the film itself, but the need for movies that engage your imagination and immerse you within the worlds they create. Love it or hate it, Avatar succeeded phenomenally at this. While certain aspects of the plot struck me as illogical and inconsistent, I found Nosferatu to be a remarkably visual movie, with a creative use of light and shadow that evokes primal feelings of dread and fear.

John and Sue invited me to spend the night at their place in the city, so I did. John and I stayed up late and watched Bachelor Party on Encore. After he went to bed, I watched Frozen River, also on Encore. The next day, after we went out for breakfast, we went back and watched the Family Guy movie parody of The Empire Strikes Back. I was tempted to make a separate entry on these three movies, but I didn't see the need. (Besides, I'd like to give an awesome movie like Frozen River a proper write-up. Maybe in the future.)

John and Sue said they'd be willing to go back to the Loews again, which is great news for me. Next month the theater will show Frank Sinatra movies. We'll see what happens.
Posted by Rich at 9:40 AM