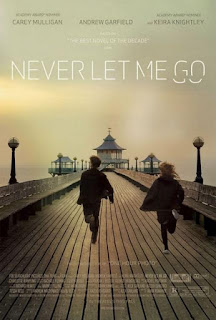 The book versus the movie. It's the struggle that has endured for as long as there have been movies: when the latter adapts the former, which is better? My philosophy traditionally has been to see the movie before reading the book, and most of the time I stick to that, because it's been my experience that when you do it the other way, it sets you up for disappointment. The example I like to give is the film Angela's Ashes. I read the book first, and then I saw the movie. While the movie wasn't bad, I think I might've liked it a bit more if I had seen it first, because no movie could ever capture the spirit of Frank McCourt's writing style. Anyone who has read the book knows exactly what I'm talking about.

A few months ago, I saw a trailer for a film called Never Let Me Go, which, it proudly trumpeted, was based on "The best novel of the decade" (according to Time), but that's not what interested me most. It started out as looking like a stuffy British period piece about a boarding school until I saw the bit where the children have some kind of device in their wrists that activates a mechanism whenever they leave their dorm. Suddenly I wondered: is this a science fiction film? Sure doesn't look like one. The thought lingered, and then one day in my favorite book shop I saw The Best Novel of the Decade on a table and I flipped through it. I could've waited for the movie, but after reading the blurb as well as the heaps of praise for it, I decided I was much too curious about this story to wait. So I bought it and read it.

A brief tangent: why does Never Let Me Go, clearly a work of science fiction, get classified with the general fiction? Is it because Kazuo Ishiguro, an acclaimed author who normally does not write genre stuff, is "slumming it" with this story? Is it because there are no ray guns or aliens? This sort of thing bothers me a little bit, and this is far from the only example. I suspect the answer may have something to do with the preconceptions - and prejudices - usually applied to sci-fi, but I can't pin it down exactly.

I didn't hate the book - in fact, I found it quite thoughtful and reflective - but perhaps my problem with it was that I approached it like a sci-fi book. Not having read anything by Ishiguro, indeed never having even heard of him before, I wasn't sure what to expect, so I tended to think of Never Let Me Go in terms of other works of dystopian sci-fi, like Brave New World, The Handmaid's Tale, and books like that. I was continually frustrated at the lack of expansion of the basic premise: human clones being bred for organ harvesting in the name of medical science. I kept wanting to know more about this world that Ishiguro set up, such as the ethics involved in such a practice, how complicit was the British government in this procedure, and most of all, how can the clones, given the fact that they appear to have minds of their own and a modicum of free will, take their situation so passively?

Eventually I realized Ishiguro wasn't interested in all of that as much as he was in examining the lives of the three principle characters and their relationship to each other. And towards the end of the book he does provide answers, to an extent, and I was more or less satisfied with them. I just thought his approach was quite different from how, say, Ray Bradbury or Ursula LeGuin would've handled it.

Here's the thing, though: the movie remains absolutely true to the book while offering a greater degree of clarity - and in this instance, I believe reading the book first enhanced my appreciation for the movie. Yes, some things have been changed - the wrist things, for instance, are new and wasn't in the book - but I feel like the movie gave me a clearer vision of the kind of story Ishiguro was telling, one that I admit I didn't completely get after finishing the book. While I liked the book, I wanted other things out of it, like a complete description of the "donation" process, the history behind it, etc. The movie was able to distill the essential elements of the story without sacrificing its integrity, and as a result I grokked it much easier. When I eventually re-read the book I expect to enjoy it more.

A brief word about the Kew Gardens Cinemas, which I haven't talked about much. It has become my go-to place for independent film now, since (a) it's closer to where I live, and (b) it's cheaper. I have to wait a little longer than I would at the Angelika or the Sunshine theaters, but I'm willing to do that. It's on a quiet little street in a hilly neighborhood across the street from the Long Island Rail Road. They get a few big-name Hollywood films - Eat Pray Love is currently playing there - but it's mostly indies and foreign films. I saw The Hurt Locker there, as well as Crazy Heart, The Kids Are All Right, and Winter's Bone, among many other films. It may not get crowds as big as in Manhattan, but it appears to do well, and has been around a long time.

I smuggled in a box of chocolate chip cookies, despite the sign out front prohibiting outside food. Haven't done that in awhile. I used to do it all the time as a kid, along with sneaking into other movies. I had briefly considered getting chips of some sort, but changed my mind. Cookies are quieter.
Posted by Rich at 9:12 AM