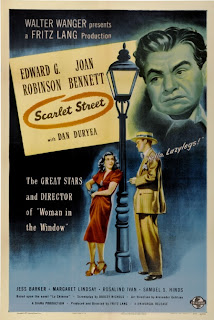 Scarlet Street is worth watching for the chance to see cinematic toughie Edward G. Robinson cast way against type as a shrinking-violet salaryman henpecked by his fussy wife and manipulated by a pair of con artists (although it's difficult, bordering on impossible, to take grown adults who use epitaphs like "Jeepers" and "For cat's sake" seriously). I gotta admit, though, it has some peculiar ideas about the art world. In the movie, EGR tells Joan Bennett he's a professional fine artist (when in fact, he only paints as a hobby), and once she gets her hands on his paintings, she and her pimp-tastic boyfriend sell them under her name. Eventually she becomes an art world star.

I love how being an artist in this movie is associated with being a "Greenwich Village long-hair," which implies a kind of radical, counter-cultural art sensibility, yet EGR's artwork is anything but. One of his paintings is a streetscape of an elevated subway platform with a snake wrapped around a pillar. A little odd, perhaps, but nowhere near as weird as some people in the film make it out to be, especially given some of the popular artists at the time this movie was released: Salvador Dali, Marcel Duchamp, Wassily Kandinsky, Mark Rothko and Rene Magritte, in their prime; and Jackson Pollock, Willem de Kooning and Francis Bacon coming up. And Picasso was still kicking around too. Granted, I wouldn't expect all of the characters to be that familiar with the fine artists of the day, but it's clear there's a basic awareness of non-traditional, counter-culture art that has redefined the medium - even if people can't name its practitioners. EGR's work is not in that league, yet people treat it like it is, which just struck me as strange.

And then there's the speed at which EGR's paintings are not only discovered by an art critic, but instantly rocketed to fame, albeit under Bennett's character's name. For as long as I've known her, which is over 17 years, Vija has been a fine artist in her spare time. I'm biased, but I think she's an excellent one. She's had her work shown around New York, as part of group exhibitions, but she has yet to have a solo show, which she does want and which I certainly think she deserves. In this movie, Bennett gets a big solo show after one art critic sees "her" work. Granted, her boyfriend strong-armed the critic and dealer into it, and the critic seemed smitten, to say the least, with Bennett, but still, she goes from a nobody into the new Georgia O'Keefe practically overnight!

And then there's the idea, perpetuated by the art critic, that women's art can be distinguished from men's art. Vija has done all kinds of material, from realistic to abstract, and I don't believe there's anything particularly "feminine" about any of it. She's done a fair amount of women and children, though I wouldn't call that in itself an indicator... or is it? I dunno. Some people do think there is validity in this idea, I know, and maybe there is (and maybe there isn't), but the way the art critic said it in the movie made it sound paternalistic and sexist - especially since he was clearly attracted to Bennett.

Scarlet Street isn't bad by any means - a bit cheesy in places, perhaps - but for some reason the more the story unraveled the more I got to thinking about this stuff. I had seen this before - I'm fairly sure it was Bill who introduced me to it - and none of this had occurred to me then. Go figure.

I was trying hard not to fall asleep while watching it. It was late and I had been up way earlier than usual yesterday because I had to go to a bike lane rally in Brooklyn. I think I've mentioned that I like to bike ride. Well, anyway, there's all this agita over biking in New York lately, and yesterday there were two different rallies both for and against a new lane in Brooklyn. So I had to get up early for it and I didn't get much sleep. Probably should've watched the movie earlier, I suppose.
Posted by Rich at 10:20 AM