The Broadway Bound Blogathon is an event spotlighting film adaptations of Broadway shows, hosted by Taking Up Room. For a complete list of participating bloggers, visit the host site.

Clint Eastwood’s adaptation of the hit Broadway musical Jersey Boys received mediocre reviews, but I didn’t think it was that bad. It certainly didn’t redefine the famous-musician biopic — it hits all the familiar beats chronicling the rise, fall and redemption of the 60s doo-wop group the Four Seasons, and maybe one shouldn’t expect more than that, particularly from a director as un-flashy and workmanlike as him. It certainly didn’t feel like a stage show, I’ll say that much — and I had no problem with him using the stage stars, including Tony-winner John Lloyd Young as Frankie Valli. 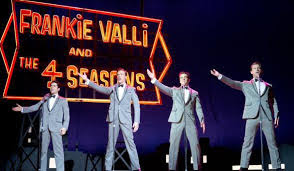 I remember hearing the Four Seasons on AM radio as a kid. In fifth grade, in fact, I had a crush on a girl named Sherri (with an “i” not a “y”), but I’d feel awkward whenever I heard the song “Sherry,” like it was advertising to the world how I felt about her. I recall thinking the group’s high-pitched voices were very unusual for guys. They couldn’t be girls, could they?

The Four Seasons were not the kinda doo-wop group my father listened to. Growing up, I always heard him play the black groups: the Drifters, the Coasters, Little Anthony and the Imperials, all those pre-Motown acts from the 50s and early 60s. I discovered the white groups like the Four Seasons on my own. I know I heard Valli’s solo hit “Grease” on the radio. I had heard the R&B remake of “Working My Way Back to You” first and thought it was the original. And I remember liking the storytelling aspect of  “December 1963” and wanting to know more about that night. Even as a kid, I had a yen for songs that told stories.

One of Virginia’s friends sings barbershop music, and she was briefly part of his quartet for a time. Barbershop is in the same ballpark as doo-wop, though I associate doo-wop with the inner city. It’s the music of street corners and dance halls, on hot summer nights — and while I never heard anybody sing doo-wop on any corners in my neighborhood, that image is inherently urban. With barbershop, I think of state fairs. Totally different vibe. 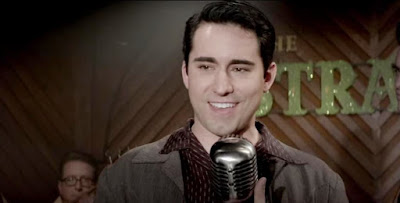 Jersey Boys is still playing in Manhattan, at the New World Stages. It opened in 2005, with the book by Marshall Brickman & Rick Elise. Young was part of the original cast, as Valli, along with Daniel Reinhard as Bob Gaudio, Tony-winner Christian Hoff as Tommy DeVito and J. Robert Spencer as Nick Massi. It won the Best Musical Tony as well as the Grammy for Best Musical Show Album. The musical was Gaudio’s idea. Here’s an interview with him discussing the show. Brickman & Elise also wrote the screenplay for the film version.

Eastwood talks about the making of the film here. Recently there was a lawsuit involving Eastwood and Warner Brothers in which the matter of whether or not material from a DeVito autobiography was used without consent. The lawsuit originally applied to the stage show before the film version was included too. You can read about it in this THR article.

—————————-
Other adaptations of theatrical shows:
Little Shop of Horrors
West Side Story
Guys and Dolls
The Music Man
Cabaret
Rent
Bells Are Ringing
Hedwig and the Angry Inch
Carmen Jones
Dreamgirls
Brighton Beach Memoirs
A Bronx Tale
Watch on the Rhine
A Raisin in the Sun