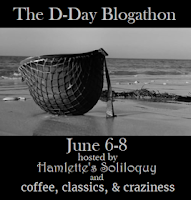 The D-Day Blogathon is an event memorializing the events of June 6, 1944 through film, hosted by Hamlette’s Soliloquy and Coffee, Classics and Craziness. For a complete list of participating bloggers, visit the links at the host sites.

I blew a chance to meet James Doohan. It was the mid-90s, and I was at a comic book convention — in Boston, perhaps, but I can’t swear to that. This was during my venture into self-publishing my own comics, and I was on my way to a panel discussion I had thought would help me in my fledgling career. I strode down a carpeted hall. To my left were tables with artists and celebrity guests from TV and film. If you’ve ever been to a con, you know they’re a regular sight, even if they have no direct connection to comics or even sci-fi/fantasy.

I looked and there he was: Scotty from Star Trek. 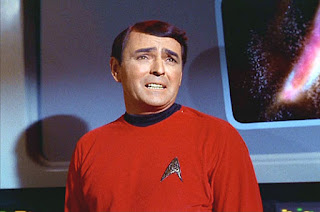 My pace slowed. I hadn’t been a Trekkie very long. While I was certainly familiar with The Original Series, I didn’t have warm, fuzzy feelings of nostalgia for the Magnificent Seven. It was The Next Generation that got me hooked. Doohan’s presence was significant to me, and I had a “Whoa” moment, but I didn’t feel a great urge to stop and speak to him because that panel was about to start. Plus, the vibe I got from him was of someone who would’ve preferred to have been somewhere else at the moment, though I may have been wrong. I continued toward the panel.

In later years, I’d meet other fans, like Bibi, and would go to more cons. When Doohan died in 2005, I was a bigger Trekkie with a deeper appreciation of TOS and its cast. I thought of that moment in Boston and regretted not stopping for Doohan. Still do. I hope this post will be my way of making up for it, however inadequately.

As Scotty, Doohan ran the engineering section of the Enterprise. Maybe he couldn’t change the laws of physics, but he had a knack for keeping the ship in one piece and out of danger long enough for Spock to come up with a solution for Captain Kirk to implement. Simon Pegg’s take on Scotty in the new movies may be a bit over the top at times, but Scotty always had a comic side to him. Just don’t make fun of the Enterprise in his presence. (Doohan’s son Chris has taken over the role in the fan-made web series Star Trek Continues.) 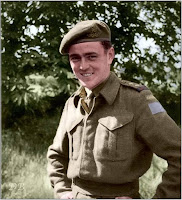 Doohan worked mostly in television, both in America and his native Canada. Prior to Trek, he appeared in such shows as Gunsmoke, The Twilight Zone, Bonanza, The Fugitive, The Man from UNCLE and many more. Earlier, he had a thriving career in Canadian radio, known for his ability with different voices and accents. I’m here today, though, to discuss a part of his past few know about: his military record during World War 2, specifically, his participation in D-Day.

World War 2 remains an evergreen inspiration for world cinema. Hollywood has a very good track record for films about the Allied invasion at Normandy, France. Here’s a list of some of the best ones, and here’s an overview of D-Day itself.

Doohan was part of the Royal Canadian Artillery. He made lieutenant while part of the 14th Field Artillery Regiment, Third Canadian Infantry Division. The artillery unit of an armed forces is responsible for large-caliber land weapons, like howitzers or mortars. 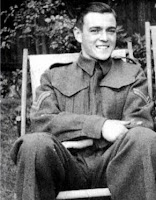 On June 6, 1944, Canada joined the Allied forces, including the United States and Britain, in a maritime offensive designed to liberate France from the Axis powers. Its official title was Operation Neptune. Doohan led his unit, D Company — “The Winnipeg Rifles” — onto Juno Beach, an area which was well documented by the Canadian forces. A 2010 TV movie called Storming Juno focused on the Canadian involvement in D-Day.

There were anti-tank mines, but Doohan and his men weren’t heavy enough to activate them. Doohan took out two snipers and led his unit as far as Courseulles in the peninsula. You can read more about the Juno Beach operation in general here.

That night, Doohan smoked a cigarette from the case his brother gave him for luck. Doohan kept it in his breast pocket. Ten minutes later, while walking back to his command post, he was shot six times by a nervous Canadian sniper, four in his left knee, one in his right middle finger, and once in his chest, a shot that might have been fatal were it not for that cigarette case.

Later, after his recovery, Doohan learned to fly a Taylorcraft Auster Mark IV plane, a liaison aircraft made by the British. In 1945, he reportedly once flew between two telephone poles on Salisbury Plain just to see if he could.

After the war, Doohan returned home and used the Canadian equivalent of the GI Bill to study science, but turned to acting after hearing what he thought was a terrible radio drama and thinking he could do better. He enrolled in a drama school in Toronto, which led to a two-year scholarship to the Neighborhood Playhouse in New York, and the rest is history.

Throughout his acting career, Doohan did his best to hide his injured right hand. On Star Trek, he had to operate the transporter, and sometimes they’d use a hand double for him, but if you look closely in one scene in the episode “The Trouble with Tribbles,” you can see his missing finger.

I didn't know any of this when I saw Doohan. Maybe if I had, I would've stopped to talk to him, asked him about that long-ago day on the beaches of France. I'm glad I know now, though. When he died, his ashes went on a ride into space. Hell of an ending for a guy who not only played a hero on TV, but was one for real too.