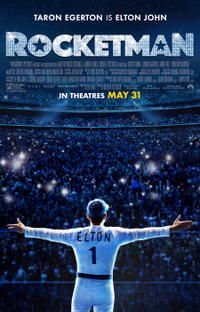 The “tortured artist/musician” biopic has become a sub-genre all its own. True, these lives are dysfunctional and make for poor role models, but they’re almost always more interesting to see dramatized than a “clean” life. I mean, there’s very little about my life as an artist and writer that would make for high drama without some heavy embellishment — but then, I’m not famous. I think, cliche though it may be, a troubled life might be the price one pays for artistic immortality.

As I write this, I’m reminded of what Jacqueline told me about her Ann Blyth biography: that the actress led a comparatively “clean” life, and that’s reflected in the book, but Jacqueline speculated such a life might be a difficult sell to major publishers — one reason among several why she chose to self-publish it.

We want torture in our artist biopics, torture and weirdness with a redemptive ending if possible, especially when it’s about a musician — and when Hollywood inevitably makes movies about people like Bowie, Prince, Michael, Cobain, Tupac, Amy, etc., they’ll get it in spades. Artists like these live these crazy lives so we don’t have to. It’s the Achilles dilemma: which is better, a long life lived in obscurity or a short life which will be remembered forever? Maybe there’s a third option. 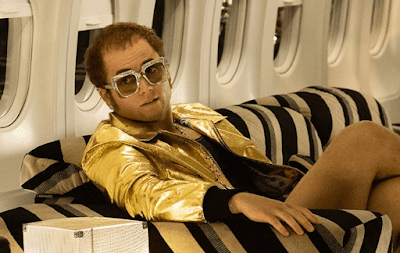 Which brings us to Elton John. In the op-ed he wrote for The Guardian prior to the release of his biopic Rocketman, John said some studios wanted less sex and drugs and more rock and roll, so to speak, so it could play as a PG-13 film, but John told them his life wasn’t quite as neat as all that:


...I didn’t want a film packed with drugs and sex, but equally, everyone knows I had quite a lot of both during the 70s and 80s, so there didn’t seem to be much point in making a movie that implied that after every gig, I’d quietly gone back to my hotel room with only a glass of warm milk and the Gideon’s Bible for company.

Left unspoken is the implication of a lesson to be learned here: John led this life of debauchery that almost killed him, but it didn’t. He came out more than okay, in fact; he’s bigger than ever and more successful, with a husband and children to boot. One could say he was able to have his cake and eat it too — not that I would recommend treading this path to anyone. He didn’t become a cautionary tale. 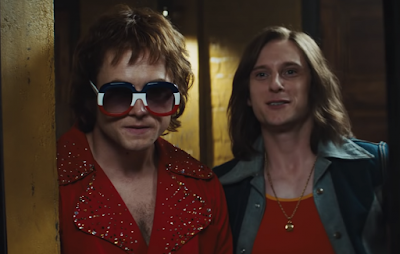 Rocketman comes hot on the heels of another biopic about a gay rock musician who had issues, but unlike Bohemian Rhapsody (a PG-13 movie), it doesn’t shy away from the rougher bits. We see Taron Egerton, as John, have passionate sex with another man; we see him snort all manner of drugs, we see the Bacchanalian parties, and while it was all handled artfully, I wasn’t as shocked by any of it as perhaps the filmmakers had hoped. Maybe I’ve become jaded?

What impressed me more was how this was a musical in the traditional sense: the songs weren’t just for when John performs in concert; they’re also used to help tell the story. They’re recontextualized to fit John’s narrative: songs that were written at later times in his life, such as “Crocodile Rock” And “Saturday Night’s Alright for Fighting” are used at earlier points in the movie because they fit the scene. Other songs are used similarly, sometimes as part of big, glitzy dance numbers. 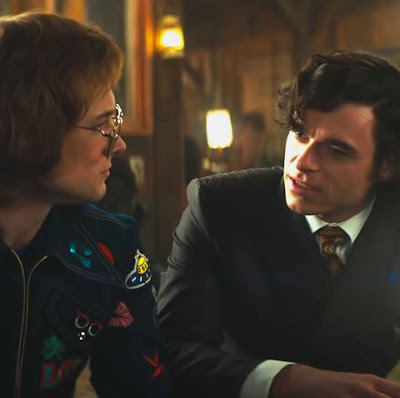 It felt much like a Broadway show instead of a movie, which was probably intentional on director Dexter Fletcher’s part. John’s younger self reappears at key moments in the narrative. Flights of fancy occur, such as John levitating off the stage. John’s rehab group in the framing sequence accompanies him into the song-and-dance numbers. It’s all pretty bizarre, but you’re encouraged to just go along with it. And Egerton is outstanding, doing his own singing and coming across convincingly as John. It’s early days yet, but is it possible we could see back-to-back Best Actor Oscar winners for rock biopics? Basically Rocketman is what Rhapsody wasn’t, and should have been.

I saw this with Ann. She was more open to seeing a rock movie than I had thought. She said afterwards that the movie sustained her interest even though she wasn’t familiar with John or his music beyond knowing a few big hits of his.
Posted by Rich at 7:30 AM