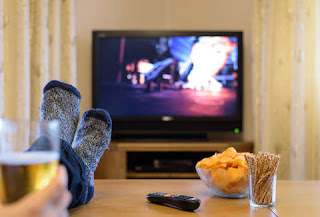 Binge-watching television has become such a natural part of our lives that sometimes we’re not even aware we do it. Part of it has to do with technology, in particular the evolution of home video, from VHS and DVD box sets to the DVR to streaming services such as Netflix. Part of it is the explosion of new cable networks that need something to put on the air before they develop original programming. And of course, part of it is the Internet, where you can upload entire seasons of old and new shows (I’m currently making my way through The Honeymooners on YouTube).

Some people take bingeing way too far, though, and last month I sought to understand why. I studied the binge phenomena in further depth by taking two streaming shows on Netflix, Ozark and Longmire, and watched the first seasons of both, the former one episode at a time and the latter all at once.

But first I asked my friends about bingeing.


I polled them on social media, simply asking whether they did it or not and why. Of those who replied, the answers leaned slightly against it.

Those who did were unequivocal about it (“I hate having to wait a week or longer in between watching [episodes]”; “My mom is disabled and likes to binge watch.... I end up binge watching with her”). Some expressed caution in the practice (“I prefer taking time to process an episode I just watched, to better remember it”). Of those who were against it, time was a factor (“I don’t have time or the inclination”). Some who had tried found the experience unsatisfying (“Details were lost, and the memories [were] not as clear as by watching week to week”). Even those who don’t do it admitted to bingeing tendencies (“in years past, when I did watch television, I DEFINITELY would have if it had been possible”).

In researching the phenomenon online, I found more articles against it than for it (not counting those “Top 10 shows you must binge” type pieces), mostly for health reasons. This Slate article is emblematic of the critical reasons against bingeing, including this argument,


...Our best friends are the ones we see every so often for years, and TV characters should be the same way. I feel like I grew up with Michael Scott, because I spent 22 minutes a week with him every Thursday night for seven years. A friend of mine who recently cranked through all eight seasons of The Office in two weeks (really) probably thinks of Carrell’s character like someone he hung out with at an intensive two-week corporate seminar and never saw again. Binge-watching reduces the potential for such deep, [Mad Men’s Don] Draper-like relationships.

which is challenged in this Grantland piece in favor of bingeing:


...If you were forced to watch the same show week by week, it wouldn’t be as meaningful because you allow the show’s portrayal of ‘real time’ to override your personal version of real time. Cliffhangers would be obnoxious. By binge-watching, you are spending quality time with the characters, forming a deep emotional connection with them.

Oh really? During the 90s, I watched The X-Files faithfully every week, and Mulder and Scully absolutely mattered to me: who they were, what they did and the dangers they faced. I don’t understand this point about real time versus the show’s “real time” and it makes no difference to me anyway.

How does one define a binge? To me, the word connotes an excessive amount, but some people might call two or three episodes excessive. I’ve seen people brag online about getting through entire seasons in one day, like it’s a badge of honor. Plus, how is bingeing measured, by time spent in front of the TV/computer/phone, or by the amount of episodes? And what about half-hour shows as opposed to hour-long ones? I couldn’t find satisfactory answers to these questions.

I’m re-watching The Honeymooners two episodes at a time, partly because there are so few (39), and they’re less than a half-hour each. I don’t want the experience to end too soon. It’s the same way with when I read a book: no matter how good it may be, I make an effort not to rush through it. I want it to last. Indeed, a study from a bingeing experiment similar to mine shows bingeing can make a show less enjoyable. Given the remarkable sustained success of a weekly show like Game of Thrones, one wonders why the streamers bother to offer entire seasons all at once.

So let’s get to the shows in my experiment. Ozark, a Netflix original starring Jason Bateman and Laura Linney, is about a financial consultant in Chicago forced into a money laundering scheme in rural Missouri for a Mexican drug cartel. This is the show I watched one at a time, and like many TV dramas these days, it’s essentially one big story divided into hour-long chapters.

Netflix makes it easy to binge by jumping to the next episode seconds after the last one ends and the closing credits roll. I’m sure that’s no accident. It took me awhile to remember to shut it off. After awhile, I was tempted to binge. It’s an unusual feeling, having the power to control one’s viewing experience so directly (besides having a remote control, I mean). It took me awhile to get into the story, but once I did, practicing restraint was hard.

Longmire is a Western-tinged crime series starring Aussie actor Robert Taylor as the sheriff of a modern-day county in Wyoming, recovering from the death of his wife. It originally aired on A&E. This was the show I binged on, watching all ten episodes of Season 1 in one day. Longmire is episodic with ongoing story arcs. That made it easier to follow. It took less time for me to grok who everyone was and what their role on the show was than Ozark, which had so much going on at once.

I snacked intermittently and alternated between sitting, standing and walking in place. I drifted off a little around the third or fourth episode, but not because I was bored. My dinner break was longer than expected because the episodes were shorter: unlike Ozark, they were made with space for commercial breaks. I ended around eleven at night.

While I wouldn't binge for so long again, the experience was not unpleasant, all things considered. Still, I took time to really prepare for it. I'm not sure this is how other people approach bingeing. I genuinely liked both shows and I plan to continue watching them, though I won't watch more than two or three episodes in one sitting.

I can see the appeal of bingeing if you have an exciting and dramatic show with which to do it, and if it's one long story. I remember watching 24 on DVD when I worked in video retail and how eager I was to know what happened next. Because Longmire was episodic, I didn't feel as much urgency to pay attention to every little detail like I did with Ozark, and that may be why I was less tempted to jump ahead to the next episode. That said, it did take longer for me to get into Ozark. I didn't have that sense of familiarity and comfort I did with Longmire after only two episodes.

Dramatic television has evolved to make bingeing more appealing to the average viewer, and streaming has made it easier than ever, but current shows like Game of Thrones have proved there's still something to be said for weekly viewing -- and of course, the medical reasons against bingeing, like I mentioned earlier, shouldn't be dismissed.

This recent anti-binge piece from The Guardian discusses the "communal" experience watching TV can provide. I touched on that in my recent discussion of the sitcoms of Norman Lear: how I would watch shows like The Jeffersons with my family as a kid. It's a strong point. Being able to talk about a show at the same time as everyone else is nice. That's likely why online TV gatherings like TCM Party are so popular.

In conclusion, I think a little hardcore bingeing can be fun if it's done sensibly, but not as a way of life.