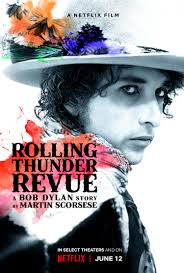 I opted to see Rolling Thunder Revue with Virginia at the last minute because I was afraid it would rain on Sunday (it did) and Toy Story 4 wasn’t out yet (though she doesn’t have much interest in that), but when I realized this is a Netflix film getting a theatrical release, I felt funny about paying money to see it.

With Roma, the big attraction in seeing that theatrically was Alfonso Cuaron’s beautiful visuals and deft compositions on a wide screen — not to mention the excellent story. That was worth paying for, and I did, twice in fact. Nothing about Revue screamed “See this on a big screen”; I doubt most documentaries “need” to be seen that way. Martin Scorsese’s next film, The Irishman, will also come out theatrically and on Netflix simultaneously, and at this point I’m not sure if I’ll make the same choice.

So. Bob Dylan. I told Virginia after the film that it was difficult for me to truly appreciate what a cultural icon he was during the 60s, as much as I’ve read about him, watched videos about him, and listened to his music. Revue helped, but for someone who wasn’t there during his creative peak, what he meant to people still strikes me as peculiar, especially now that songwriting skill in general feels devalued these days. 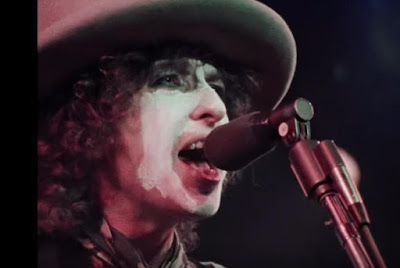 In 1975, Dylan organized a tour with Joan Baez and other folkies, plus counterculture figures like Allen Ginsberg, in which he played small towns in smaller venues, riding around in a bus which he drove himself. It was called the Rolling Thunder Revue. Concert footage from that tour, plus new interviews with Dylan and others, comprise this doc, continuing a streak of concert films Scorsese has pursued on and off for years, including The Last Waltz (The Band), Shine a Light (the Rolling Stones) and George Harrison: Living in the Material World. It also captures some of the zeitgeist of the era.

And it includes material Scorsese simply made up.

Why? He comes close to explaining his rationale in this interview, though if you look at the film on its own, you could easily be fooled into thinking the whole thing was genuine. Theories abound — here’s one — but ultimately this doesn’t bother me as much as it probably should. Dylan always struck me as this enigmatic, almost mythical figure. The pompous subtitle kinda implies there’s more going on here than what lies on the surface, something that feeds into the myth of Dylan — and Scorsese’s not the first filmmaker to recognize this. Remember that Todd Haynes “biopic” of Dylan, I’m Not There, in which “Dylan” was played by, among others, a black child and a woman? Something about Dylan seems to inspire reinterpretation... but I’m not the one to explain why. 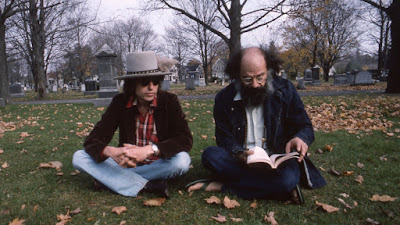 Virginia really dug this movie. She had wanted to see it before I off-handedly suggested it, and not just because she did live through the peak Dylan era. She knew peripherally a couple of people in the film from musical performances she was part of in the past — a fourth or fifth degree of separation, I think. She kept telling me about it during the film.

Watching it with an audience, I felt like everyone else understood Dylan and his career, not to mention the people involved in this story, better than me: there was knowing laughter in spots I didn’t think was funny, and even Virginia made “mm hmm” noises to herself in recognition, as if she was having a conversation with the film to which I wasn’t privy. I half-expected this sort of thing. Every time I think I’ve gotten a handle on 60s culture (Dylan is of the 60s, and this movie feeds off that vibe), something new comes along — like this.
Posted by Rich at 3:30 PM