These are the days: Sitcom king Norman Lear 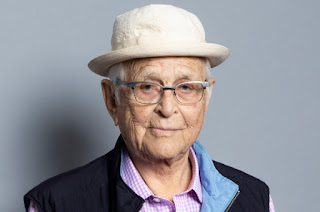 I have vague memories of watching All in the Family in syndication, but my family and I definitely lined up every week for The Jeffersons. George & Louise were nothing like my parents, and I never projected myself into their fictitious lives, but even to my young and highly impressionable mind, I believe I was aware of the significance of seeing them, an affluent black couple, on television. I may not have been able to fully process the racial and sociological politics at play, but I recognized George as a dude who took no shit from fools and was true to himself. Though I liked Weezie (I regret not knowing well anyone named Louise so I could call them Weezie), I identified more with George. I loved Florence, the maid. She was awesome.

The Jeffersons was the first time I saw an interracial couple. It was the first time I saw black people interacting with people from wildly different cultures (if you can call England wildly different). It gave me a sense of black history as a tangible thing, not just something you read about in books —even if George tended to exaggerate his upbringing, calling himself the son of a sharecropper. It showed me how diverse black people can be within a single program: Weezie was different from Florence, and they both were different than Helen. And nothing, I mean nothing, beats that theme song.

The significance of this show wouldn’t register in my mind until much later in life, but looking back, I can appreciate how much it meant to me back then — and for that I can thank Norman Lear.


When it comes to American television, few names are bigger than his. His legacy as a writer-producer is a string of hit sitcoms — Maude, Good Times, Sanford and Son, One Day at a Time, etc. — which sought to educate and entertain, and often that meant pushing the envelope of what was considered proper on the airwaves. Wednesday night, in a celebration of that legacy, ABC presented Live in Front of a Studio Audience: Norman Lear’s All in the Family and The Jeffersons, a live special in which two all-star casts re-created episodes from both shows, co-hosted by Lear and late night talk show host Jimmy Kimmel.

Family, an American remake of an equally groundbreaking sitcom from England, Til Death Us Do Part, starred Carroll O’Connor as an unrepentant, conservative bigot, and Jean Stapleton as his long-suffering, put-upon wife. The humor was in seeing O’Connor’s character, Archie, get his comeuppance week after week, and though Lear anticipated audience outrage from day one, the reaction was the opposite. The Jeffersons was a spin-off of Family, starring Sherman Hemsley and Isabel Sanford as an upwardly-mobile black couple living amidst the upper crust of Manhattan. Hemsley’s character, George, was as much of a firebrand as Archie, and just as intransigent in his attitudes about race and class.

Lear began in sketch comedy before moving up into producing and directing films as well as shows  (he made the Dick van Dyke satire Cold Turkey). When he read about Til Death, it reminded him of his relationship with his father. He bought the rights to the show, incorporated some of his own childhood experiences into the characters, and wrote a pilot. (CBS originally wanted to develop Til Death as a new series for Jackie Gleason!) Lear offered his show to ABC but CBS went after it and got it instead. The pilot aired in 1971 and the rest is history.

The Jeffersons were an integral part of Family from the outset, beginning with the appearance of Mike Evans, as George & Louise’s son Lionel, in the first episode. Hemsley and Sanford appeared later, and all three characters appeared sporadically on Family until they graduated to their own show in 1975.

Wednesday’s live special featured Woody Harrelson and Marisa Tomei as Archie & Edith, and Jamie Foxx and Wanda Sykes as George & Louise. I watched it with my mother, as we used to with the rest of our family in my childhood. (Recently, Lear had also revived One Day, as a series for Netflix starring Rita Moreno, and there has been talk about him possibly doing other revivals.)

Harrelson and Tomei, like O’Connor and Stapleton before them, performed the theme song, “Those Were the Days,” in character as Archie & Edith. It was difficult for me to not see Harrelson as himself: he had Archie’s broad accent and mannerisms, but he looked the same. I think he got the spirit of Archie down, though. Harrelson, of course, started out on the TV show Cheers many years ago, which was filmed before a live audience.

Tomei resembled her character more, but even if she didn’t it wouldn’t matter because she absolutely was Edith. My mother noticed that right away and we agreed: Tomei had the voice, the attitude, the style — and she hit that high note in the theme song like I hoped she would. Ellie Kemper and Ike Barinholtz played Gloria and Mike. They were fine, though they both looked very modern, which was jarring when I saw them talking about Nixon and other things from the 70s.

The episode was the one with the first appearance of George, so Foxx and Sykes were there too, along with Jovan Adepo as Lionel and Anthony Anderson as George’s brother Henry. You probably heard by now that Foxx messed up a line. He recovered well, though; when he was on In Living Color, he performed for a live audience, and once the show aired live. Foxx had Hemsley’s swagger, plus, with his Afro done up like Hemsley’s, he looked the part. Sykes didn’t feel quite as authoritative as Sanford, though her wardrobe made her look like Weezie.

The Jeffersons segment began with Jennifer Hudson belting out the theme song, “Movin’ On Up” (but it should’ve been Lenny Kravitz instead). Co-producer Will Ferrell and Kerry Washington played Tom and Helen, with Stephen Tobolowski as Mr. Bentley and Jackee Harry as Louise’s friend Diana. This was the episode that introduced Florence. You’ve also probably heard by now that original cast member Marla Gibbs, 88 years young, made a surprise appearance in her role, and I could not have been more thrilled.

The night was funny and nostalgic, but it wasn’t perfect. Both performances followed the original teleplays of their respective episodes. In the case of The Jeffersons, it included the epithet nigger, which was aggressively censored. My mother and I talked this over: she made the point, an accurate one, that modern audiences wouldn’t accept hearing that word. They’d complain to the network, advertisers would get nervous, and ratings would be threatened.

And yet over forty years ago, Lear could get away with it. Why? He needed to accurately portray George as the kind of person who uses such words, and why — and he did it responsibly, not gratuitously. It’s meant to shake the audience out of their complacency and remind them people like George exist. (Context: he accuses Tom, a white man, of being afraid to use the word around Helen, his black wife, which is why they allegedly never fight.) And on a night meant to honor Lear and his place in television history, censoring the word felt like undermining his legacy. ABC could have began the special with a “viewer discretion advised” disclaimer if the usage made them antsy. Plus, it must be said, the word honkey was not censored. That smelled like a double standard to me.

Regardless, this was a special night that reminded us of how special and relevant Lear's work was, and still is. Would that there were more shows like these.