Links and a new challenge 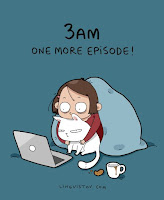 Long before the ascension of the streamers, binge watching TV was a thing thanks to DVD box sets of entire seasons of shows. Now that the streamers distribute their original programming similarly — releasing whole seasons at once — a generation is growing up not needing to wait a week between episodes.

I never saw that as a detriment as a kid. The anticipation of the next episode was part of the excitement of watching TV. The instant gratification of bingeing on entire seasons at once rubs me the wrong way. Sure, there are more programs than ever these days, in multiple media, but we can’t watch them all... can we? More to the point, do you appreciate a show more when you binge?

Over the next month, I’m gonna attempt to find out. I will take two shows available on Netflix and watch them both ways; one the old-fashioned way, one at a time; the other in a day (maybe two), and compare notes on both. Both shows have been recommended to me by friends.

The first will be Ozark, a Netflix original starring Jason Bateman and one of my favorite actresses, Laura Linney. One of my novel beta readers recommended it. This will be the one-at-a-time show. The other show is Longmire, an import from A&E. Paddy mentioned it in the comments here a few weeks ago. That will be the binge show. You can follow my progress on Twitter under the hashtag #bingexpmt. Next month I’ll share what I’ve discovered.

Turner Classic Movies turned 25 last month. Like my classic movie blogger pals, I’m grateful for what they do in providing Old Hollywood movies uncut and uninterrupted, 24-7, and I hope they keep going for 25 more years. My attitude, from the outset of this blog eight and a half years ago, has always been to use the movies of the past to better understand the movies of today, and vice versa. This isn’t something I see in the classic film blogs I read and enjoy; many of those bloggers would rather celebrate Old Hollywood full stop, and that’s fine. Long time readers will remember I devoted all of 2015 to classic film — but that experience made me appreciate more the need for contrast: to see what changes over the years in the industry and what stays the same. For instance, what are the SF/fantasy franchises but the modern incarnation of the serialized films of the past: The Thin Man, Blondie, Charlie Chan, Lassie, etc.

There was a period a few years back when we thought TCM was in danger of either extinction or at least alteration, the way AMC abandoned classic film in favor of original programming. TCM weathered that, and while I know some fans still grumble over the occasional post-80s movie, from what I can tell, TCM is still recognizable as the station adored by many cinephiles. That’s good.

Your links for this month:

Aurora compiles a list of testimonials in praise of TCM.

Paddy files this report from the Toronto Silent Film Festival.

Fritzie finds evidence of fan nitpicking during the silent era.

The head of AMC Theaters is AOK with the Disney-Fox deal.

The future, under Disney, of Fox archive titles that get theatrical bookings.

Disney’s forthcoming streaming service will edit the original Dumbo and exclude Song of the South.

Two all-star casts will recreate All in the Family and The Jeffersons in a live prime time TV special this month.

Which is more amazing: a high school class putting on a stage adaptation of Alien or Sigourney Weaver visiting them?

What does Avengers: Endgame look like to a Marvel virgin? (Possible spoilers.)
Posted by Rich at 7:28 AM