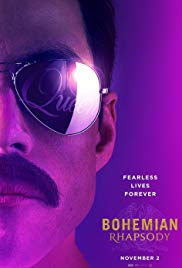 I don't have any special memories associated with the music of Queen. They were part of my rock education, listening to classic rock radio in high school, and I dug them. I'm glad there's a movie about them in general and lead singer Freddie Mercury in particular, but that's about it. I didn't lose my virginity to a Queen song or anything like that.

As far as musical biopics go, Bohemian Rhapsody was pretty conventional: typical "rise and fall and rise again" story, with all the hit songs you know and love, all the conflict you expect, even a bit of romance. 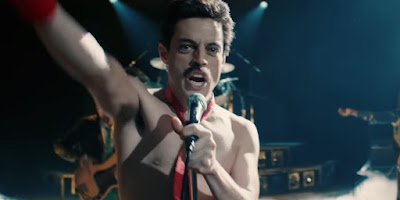 The music was what kept me interested, that and the sensational portrayal of Mercury by Rami Malek — but it felt by-the-numbers. I'm not sure what Bryan Singer could have done to make this different, but I was aware, as I watched it, of its conventionality, and that kinda dimmed my appreciation.

There will be more rock biopics on the horizon: next year will bring the Elton John movie, and you can bet your bottom dollar someone, somewhere, will make a Bowie movie (I nominate Michel Gondry), and probably a Prince movie too.

Will any of it make rock relevant again? 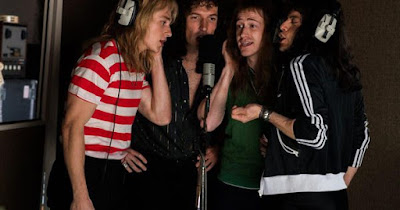 Rhapsody ends with Queen at Live Aid, a benefit concert — the benefit concert — made when rock still seemed capable of changing the world. I can't recall the last time rock mattered to such a degree. Of course, if the "Rock and Roll" Hall of Fame is any indication, the very name has been diluted to include singers and groups as far removed from rock as you can get, but that's another issue.

I suspect the answer is no: Freddy Mercury the cultural icon will always be in, but the music he made with Queen will get a little juice while Rhapsody plays in theaters and then return to the classic rock radio ghetto for the old fogies like me, to be trotted out once in awhile for car commercials and the occasional American Idol contestant.