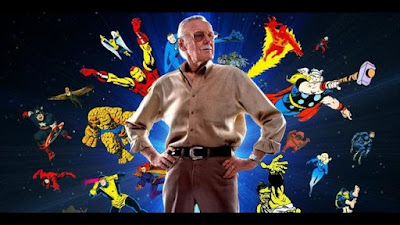 His name was always at the top of every Marvel comic book when I grew up. The first page would have a small box that briefly described the character, in a sentence or two, and then the words: "Stan Lee Presents."

I knew who he was because he was on TV, sort of. He would do voice-over introductions to The Incredible Hulk and Spider-Man and his Amazing Friends on Saturday mornings.

It was comforting, in its way. To my mind, it was like he was the caretaker of the Marvel Universe, a constant, active presence who acted in its best interests, though I couldn't have phrased it that way back then.

I met him at a convention once. He autographed for me some comics he had written, including a special issue of my favorite comic, Fantastic Four. 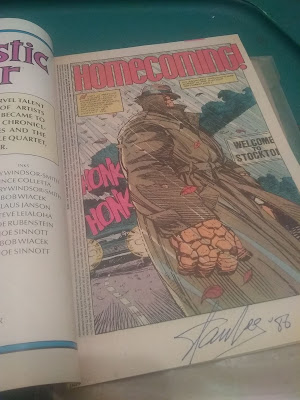 Marvel Comics used to have a newsletter-type page in every comic. Sometimes he would say a few words in it, usually reporting from Hollywood about the in-roads Marvel was making: a new TV show here, a new video game there, that sort of thing. It was exciting.

Those in-roads laid the foundation for the Marvel kingdom of today: a subsidiary of the mightier Disney empire, true, but his creations — in collaboration with Jack Kirby, Steve Ditko, John Romita, and all the rest — have never been more popular. (Whether or not this has translated into higher sales of the comics themselves is another story.)

Recent years have not been kind to him: embroiled in one lawsuit after another, not to mention a contentious relationship with his daughter. I can only hope he made peace with her before he went to that great bullpen in the sky.

Today is a sad day for Fandom Assembled, but we will never forget him and his great gift to American popular culture. I have distanced myself from the comics; they no longer mean to me what they once did. Still, if it weren't for them, my life — the friends I've made over the years, the passion I have for visual art in general — would be quite different.