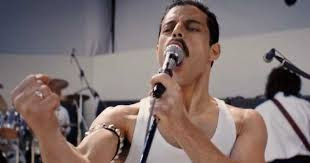 Big news! Some of you are familiar with The Dark Pages, the newsletter (as in actual paper, not an e-newsletter) of the film noir website All That Noir. The December issue is a year-end, oversized special, and guess who got an invitation to contribute a guest article?

The theme for this special issue is "great couples of noir," and after watching so many of his noir films back in 2015, I decided to take on director Anthony Mann, along with his DP, John Alton. The issue will come out December 20. It's sure to make a nice last-minute Christmas gift for the noir fan on your list.

My thanks to Kristina from Speakeasy and TDP editor Karen Burroughs Hannsberry for the opportunity.

By the time you read this, the Queen biopic Bohemian Rhapsody should be playing in theaters everywhere. If you like Queen and the movie, I'd like to give a plug here for a graphic novel by my friend Mike Dawson called Freddie and Me.

It's a memoir about when Mike grew up a Queen fan, in England and America. He's a very good artist, and he infuses this story with a lot of love for Freddie Mercury and 80s pop music in general. Check it out; you won't regret it.

The novel rewrite is close to done, and once it is, I'll have to edit it, which means checking for grammar and spelling, not to mention any other minute changes I may want to make (and I will want). In the new year I'll go shopping for an agent and we'll see what happens.

I've decided not to self-publish after all. After giving it some thought, I don't think I have the resources or wherewithal to commit to that route at this time. Maybe I'd do it in the future.

With all due respect to people like Jacqueline, from what I can tell, it's not like self-publishing comics, where it really is as easy as folding and stapling some Xeroxed photocopies and selling them at your local con, or better yet, scanning those pages and posting them online. It costs more, for one thing. And the truth is, I really do wanna see my book in a bookstore. Queens has seen the birth of two new independent bookstores within the past year. (Yes, it's possible to get your self-published book in a bookstore, but my understanding is it's rare.)

I have a couple of ideas for what to write next; it's just a matter of deciding on them.


Maddy answers film questions from her readers and talks about how she started watching old movies.

Does First Man look passe in the Star Wars age?

My friend Anna Crawford wrote this piece about older women in horror movies.

Did World War 1 give birth to the horror genre?

How the iconic look of the Frankenstein monster was made.

A professional silent film music accompanist tells you how to score a silent film for Halloween.

Check out these new official dictionary words and phrases inspired by film!

The story of a Bay Area late night horror movie show and some of its famous fans, along with its revival.

And then there was the time back in 1935 when a horse tried to see a movie in Queens.
Posted by Rich at 7:18 AM