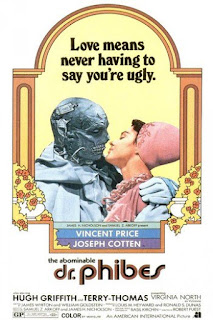 The Abominable Dr. Phibes is a film I had wanted to see for awhile. I went into it knowing nothing about it, expecting Vincent Price in a campy mad scientist flick, one with which I could laugh along. What I got was something more.

It's a simple revenge story: Price, the titular doctor, blames Joseph Cotten (!) for failing to save his wife on the operating table (though he did the best he could), so now Price has launched an elaborate scheme to kill Cotten and everyone involved in the failed operation, and boy, is it elaborate. 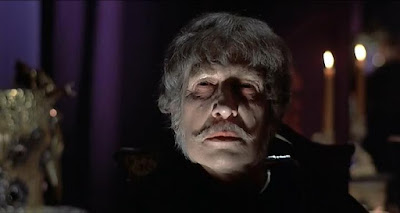 It's a vendetta worthy of a Bond villain, with a symbolic theme, perfectly timed death traps that would've taken months to plan individually, a henchman — or should I say henchwoman, a secret lair Dr. Evil would find excessive, and a shtick of his own: a fondness for the organ with a wardrobe Elton John would be embarrassed to wear.

It all sounds derivative, but the way it was done was something else. The first ten minutes are silent; Price doesn't speak for the first half hour. The score is minimal and non-intrusive. The editing is crisp and serves the story well. The set design and costumes are eye-catching. The acting is not tongue-in-cheek; everyone plays it straight.

And then there's Price. He has a thingamajig that makes him speak without moving his lips, though you see his jaw and Adam's apple move. His performance is mostly in his eyes and face and body. At times, he's disturbing to watch. 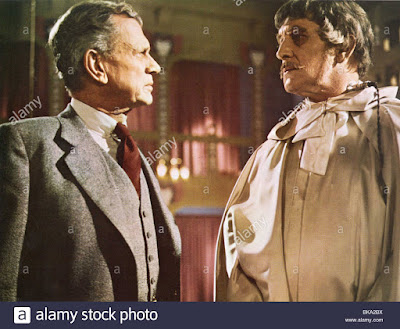 Director Robert Fuest keeps him from going too far overboard by focusing on atmosphere. He frames the shots well. The tension they generate is almost — dare I say it — Kubrickian.

Phibes isn't original by any means, but it's entirely watchable due to the magnetic cinematography, the bizarre visuals, and Price's performance. I have no doubt horror fans consider this an all-timer.

UPDATE 11.6.18: I didn't watch the sequel, Dr. Phibes Rises Again, until after writing about the original, because I didn't want to be disappointed by it, but it turns out it's almost as good. Fuest directs again, and co-writes. This time, Phibes travels to Egypt, pursuing an ancient legend that would revive his wife, but he's got competition from another dude who's pursuing the same legend. More scary, torturous deaths, more organ playing, even some legitimate humor. Both movies are good!
Posted by Rich at 7:30 AM