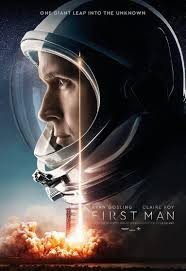 The moon was half full the day I saw First Man. I noticed it on my way home, the sky darkening early in the fall sky. Sometimes when I look at it, I wonder what our primitive ancestors made of it — an image in the sky that changes shape consistently. I'll bet they made up some pretty good stories about what it was and what it was for.

We can only guess whether they thought it was a place to which humans could visit.

Next year will mark the fiftieth anniversary of the moon landing, when Neil Armstrong made his "giant leap for mankind," with Buzz Aldrin and Michael Collins. First Man makes us appreciate, with nail-biting, white-knuckle clarity, how utterly dangerous this venture was. No lie, some of those scenes in space were difficult to watch because the camera kept spinning and spinning. 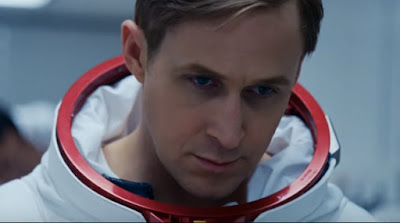 This movie has been used as a piñata by the right and the left for reasons too stupid to get into (seriously, I'm not even gonna justify them with links). I didn't read about any of it until after I saw the movie. I think they're both full of shit, as they usually are. And that's all I have to say about that.

Some very rich people are investing in space travel these days so some other rich people can pay for the privilege. The rest of us will have to wait our turn, and by then, who knows, we could all be dead. It seems to me space travel would be a good idea so we can think about living in places other than Earth — but what do I know? I'm not Elon Musk. 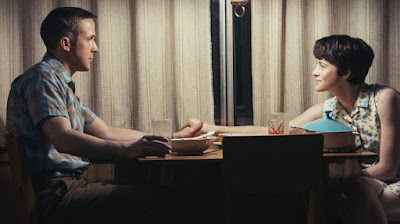 So how about that Damien Chazelle, huh? In a short time, he's established himself as a filmmaker to watch: one who takes on a variety of subjects with a vision for carrying them out. He gets some intense performances out of his actors, his cinematographers are distinctive, his Oscar-winning composer, Justin Hurwitz, is superb (I liked his work on First Man), and he's only 33. Dude's going places.
Posted by Rich at 2:00 PM