I saw both these films with Virginia and we liked them both. Why didn't I write full posts about them? Because I didn't. 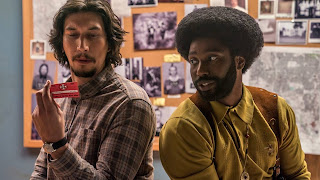 -BlacKkKlansman. Spike Lee has been kinda so-so lately, so it's nice to see such a stylish and entertaining film from him again. John David Washington is the son of Denzel Washington; he had a small role in Malcolm X years ago, according to IMDB. He sounds a lot like his dad, too. The most memorable moment for me was when the "white power" rhetoric of the Klansmen was juxtaposed against the "black power" dogma of the black activists. Unexpected and unsettling — that's Spike at his best. Virginia was particularly interested in the true story angle. 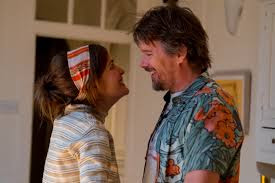 - Juliet, Naked. The latest adaptation of a Nick Hornby novel got mediocre reviews, but I liked it — and not just because I'm a fan. The changes from the book didn't bother me much. As I told Virginia afterwards, Ethan Hawke's interpretation of his character's songs, good as they sounded, can never match the ones I imagined when I read the book. So while obviously we needed to hear his character's songs for the movie, a part of me almost wishes we didn't, if you know what I mean. A nice companion piece to High Fidelity.
Posted by Rich at 7:30 AM